A cable railway (also known as an or ) is a steeply graded that uses a cable or to haul trains.

Cable railways are typically built where the gradient of the route is so steep that a conventional train could not climb the track. Most commonly the cable is operated by a , although other methods such as gravity or water-balance are also used.

Many cable railways connect to conventional adhesion lines at their top and bottom, allowing trains to be lifted from a lower line to a higher one. A specific type of cable railway is the , which is a self-contained railway, unconnected to another line. This requires the loading and unloading of passengers and goods at both ends.

The majority of inclines were used in industrial settings, predominantly in quarries and mines. The Welsh slate industry made extensive use of inclines to connect quarry galleries and underground chambers with the mills where slate was processed

Level tracks are arranged above and below the gradient to allow wagons to be moved onto the incline either singularly or in short rakes of two or more.

On the incline itself the tracks may be interlaced to reduce the width of land needed. This requires use of : either a single track of two rails, or a three-rail track where trains share a common rail; at the centre of the incline there will be a to allow the ascending and descending trains to pass each other.

Railway workers attach the cable to the upper wagon, and detach it when it arrives at the other end of the incline. Generally, special-purpose safety couplings are used rather than the ordinary wagon couplings. The cables may be guided between the rails on the incline by a series of rollers so that they do not fall across the rail where they would be damaged by the wheels on the wagons.

Occasionally inclines were used to move locomotives between levels, but these were comparatively rare as it was normally cheaper to provide a separate fleet of locomotives on either side of the incline, or else to work the level sections with horses.

On early railways, cable-worked inclines were also used on some passenger lines, for example at Cowlairs in .

The speed of the wagons was usually controlled by means of a brake that acted on the "winding drum" at the head of the incline. The incline cable passed round the drum several times to ensure there was sufficient friction for the brake to slow the rotation of the drum – and therefore the wagons – without the cable slipping.

At the head of the incline various devices were employed to ensure that wagons did not start to descend before they were attached to the cable. These ranged from simple lumps of rock wedged behind the wagon's wheels to permanently installed chocks that were mechanically synchronized with the drum braking system. At a system was installed that raised a short section of the rail at the head of the incline to prevent runaways.

The operation of an incline was typically controlled by the brakesman positioned at the winding house. A variety of systems were used to communicate with workers at the bottom of the incline, whose job it was to attach and detach the wagons from the incline cable. One of the most common communication methods was a simple electrical bell system. 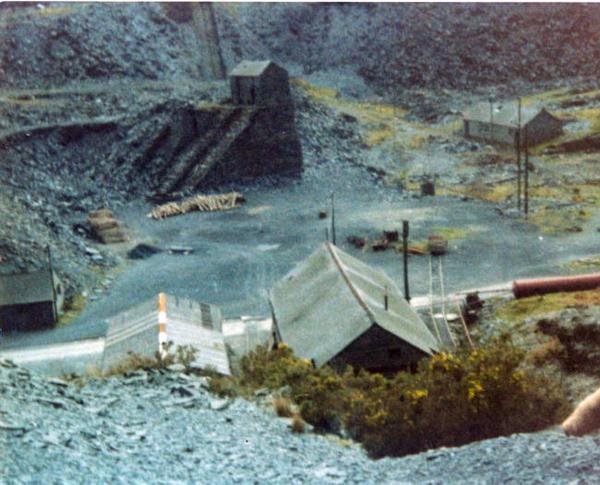 thumb|right| with a water balance incline in the background] Cable railways are basically classified by the power source used to wind the cable.

A drives the winding drum that hauls the wagons to the top of the inclined plane and may provide braking for descending loads. Only a single track and cable is required for this type. The stationary engine may be a steam or engine, or may be a .

In a gravity balance system two parallel tracks are employed with ascending trains on one and descending trains on the adjacent track. A single cable is attached to both trains, wound round a winding drum at the top of the incline to provide braking. The weight of the loaded descending cars is used to lift the ascending empties.

A variation of the gravity balance incline was the "tank" incline found at several quarries in north , notably the . These were worked by gravity, but instead of the wagons running on their own wheels, permanently attached angled wagons were used that had a horizontal platform on which the cargo-carrying wagons rode. Despite their name, these inclines were not a form of water balance incline.

This is a variant of the gravity balance incline that can be used to move loads uphill. The weight of the unloaded descending train is increased using water until it is greater than the train travelling uphill. At this point gravity allows the uphill train to ascend. The water is either carried in an additional water wagon attached to the descending train, or is carried in a platform on which the train descends.

This form of incline has the advantages of a gravity balance system with the added ability to haul loads uphill. It is only practical where a large supply of water is available at the top of the incline.

An example of this type of cable railway is the passenger carrying .

This is most commonly used for a temporary incline where setting up the infrastructure of a winding drum and stationary engine is not appropriate. It is similarly employed for recovery operations where derailed rolling stock must be hauled back to the permanent track. [ [http://www.railquip.com/rerailing/images/Haulage_Device.htm Picture of recovery gear that uses a locomotive as its power source] (Accessed 2008-03-26)]

* The on the outskirts of , in , is the world's only preserved operational standard gauge cable railway system.

* opened in 1831 with grades up to 1 in 8. Had nine inclined planes: eight were engine-powered, one was a counterbalance (gravity) type operated by a . The Winding Engine House at the summit of Middleton Incline has been preserved and the ancient steam engine inside, once used to haul wagons up, is often demonstrated

*
** Opened with cable haulage down a 1 in 48 grade to the dockside.
** Designed for cable haulage up and down 1 in 100 grades at in the belief that haulage was impracticable. The showed that locomotives could handle 1 in 100 gradients.

* The Welsh industry made heavy use of gravity balance and water balance inclines to move slates from quarries down to points. Examples of substantial inclines were found in the quarries feeding the , the and the amongst others.

* The (1879-1967), north of , was gravity worked. It descended 518 metres in a track distance of 1,670 metres, separated into two inclines, and during its life carried 13 million tonnes of coal. [ [http://www.teara.govt.nz/EarthSeaAndSky/MineralResources/CoalAndCoalMining/3/ENZ-Resources/Standard/6/en Denniston Incline (including video) (Access date: 18 June 2007)] ]