Flour beetles are members of the darkling beetle genus Tribolium or Tenebrio. They are pests of cereal silos and are widely used as laboratory animals, as they are easy to keep. The flour beetles enjoy wheat and other grains and are adapted to survive in very dry environments and can withstand high amounts of radiation (even more than cockroaches).[1] They are a major pest in the agricultural industry and are highly resistant to insecticides.

The larvae of T. molitor when full-grown are known as mealworms, small specimens and the larvae of the other species are called mini mealworms.

Larvae are less than a millimetre in length, and are also found in agricultural industries. 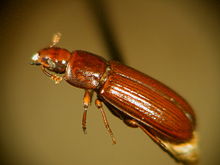 In 2008, the Tribolium castaneum genome was sequenced by the Tribolium Genome Sequencing Consortium. The results were published in Nature Magazine.[2]

An experiment carried out by MythBusters revealed that they are able to survive 1000 gray (100,000 rad), 100 times the immediate lethal dose of radiation for humans, in 10% of the cases.