- The College Federal Reserve Challenge of the Federal Reserve System is a yearly academic competition sponsored by several reserve banks and is administered by the Eastern Economic Association. The College Federal Reserve Challenge consists of teams of three to five students from nearby colleges and universities. Each team is responsible for creating a presentation 20 minutes in length to be delivered in front of a panel of judges consisting of academics and professional economists. Concluding the presentation, a 15 minute question and answer session ensues between the collegiate group and the panel. By advancing through three rounds of local competition, successful teams win recognition, with the first place team continuing to Washington, D.C. to compete against other regional winners at the Board of Governors.[1] In addition to the educational benefits and confidence arising through rigorous competition, students benefit from opportunities to apply their economic experiences in the real world. These skills learned can be applied to acquire internships, discover potential career paths, and hone skills of public speaking, logical thinking, writing, and analysis. Instructors of undergraduate institutions benefit through the use of a venue to develop enthusiasm for the study of economics and to integrate their curriculum with an active learning experience.[1]

Teams of 3-5 students present current macroeconomic and financial information to a panel compiled of professional economists, bankers, financial analysts, and academics. Each team is afforded 15 minutes to analyze and present various macroeconomic theories which if implemented, could lead to economic prosperity. At the end of the 15 minute presentation the team must formulate a monetary plan for the Federal Reserve Bank to implement. A 15 minute question and answer session involving the presenting team and the panel follows the 15 minute presentation. Panel members quiz the students on current events, economic definitions, and macroeconomic policy during the 15 minute session.[1][2][3] Teams compete in two rounds at the regional competition which takes place at a nearby Federal Reserve Bank. Winners of the regional competition advance to the final round in the national competition, held in Washington, DC. The winning team informally meets the Chairman of the Federal Reserve, Ben Bernanke, and shakes his hand.[4]

The panel of judges score each team after the 15 minute question and answer session. A maximum of 50 points are awarded accordingly. Judges use a scoring rubric which analyzes the team's “Knowledge of the Fed, current state of the economy, and monetary policy”, “Responses to Judges questions”, “Quality of the presentation”, “Research and analysis”, and “Teamwork and cooperation”.[2] 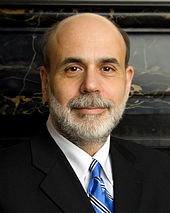 Portrait of Ben Bernanke, Chairman of the Federal Reserve