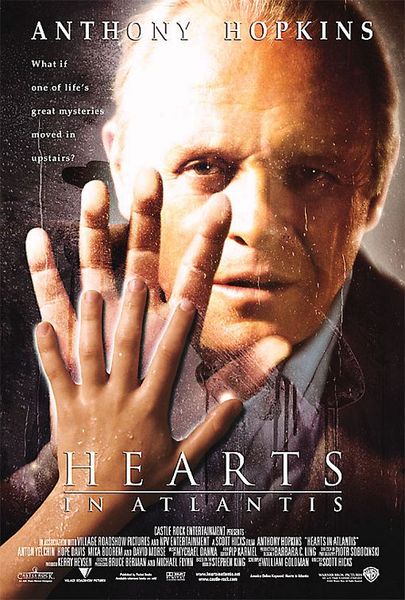 "Hearts in Atlantis" is a 2001 directed by . It is loosely adapted from 's novella "Low Men in Yellow Coats", from his story collection "".

"Hearts in Atlantis" revolves around Robert "Bobby" Garfield, a middle-aged man recollecting his past, in particular the summer when he was eleven years old. During that summer he and his two friends Carol Gerber and John "Sully" Sullivan experienced many things together, the most mysterious of which was meeting an elderly drifter named Ted Brautigan.

Bobby lives with his single mother, the self-centered Liz Garfield, who takes in Brautigan as a boarder. Ted takes the lonely Bobby under his wing, while his mother is busy with her job and entertains her boss as a way of paying off debt supposedly left by Bobby's late father. The two form a father-son bond, and it slowly becomes clear that Ted has some psychic and telekinetic powers that rub off on the young boy. These same powers are the reason that Brautigan has come to this sleepy town; he has escaped the grasp of the "Low Men", strange people who wouldn't stop at anything to get their hands back on Ted.

Bobby, Carol and John have frequent conflicts with the local town bully, whom Ted is able to scare away by looking into his mind and finding out that his violence is used to cover up the fact that he is secretly gay and a cross-dresser. However, at one point the bully hurts Carol, and when Ted manipulates her dislocated shoulder into place, Bobby's mother arrives and mistakenly believes that Ted is a child molester. She is confronted by Ted's ability to tell her the truth about what she is doing with her boss and how it is affecting her relationship with her son, providing another reason that Ted must leave. That and the government is closing in on him. Ted is eventually captured by the authorities with the help of a tip from Bobby's selfish mother. As some form of closure Ted yells to Bobby as he is being driven away that he wouldn't have missed a moment. And later Bobby mirrors the same feelings.

This movie was well received by the critics, but the aftermath of September 11th affected the initial box office.When the film was released on DVD it shot to the the top of the DVD release taking $ 48 million in the first two weeks, showing that the film always had an audience.

Differences from the source material

The story that it was based on had deep ties into King's epic "The Dark Tower". In the original novella, the 'low men' were in fact , agents of the . Ted Brautigan was a 'breaker', a psychic whose abilities made him able (unwillingly, of course) to 'break' down the beams surrounding the Dark Tower, the linchpin of all existence. Although he is taken away at the end, like the film, it is later implied that he escapes as Bobby later receives rose petals in the mail. (The Dark Tower is in the middle of a large field of roses).

Carol does not die in the story as well. She is believed to have perished in a fire, but in the end, she meets up with Bobby but under a different name.