Maytag is a blue cheese produced on the Maytag Dairy Farms outside of Newton, Iowa, the former home of the Maytag Corporation. In 1938, Iowa State University developed a new process for making blue cheese from homogenized cow's milk instead of the traditional sheep's milk.

In 1941, production of the cheese was started by Frederick L. Maytag II and Robert Maytag, grandsons of the founder of the Maytag appliance company, Frederick Louis Maytag I. In the beginning, the milk for the cheese came from a prize winning herd of Holstein cattle that was established by E. H. Maytag, a son of the Maytag founder.[1]

The company is currently owned by the third and fourth generations of the Maytag family.

The process for making Maytag Blue Cheese was discovered and patented by two Iowa State University microbiologists, Clarence Lane and Bernard W. Hammer. Roquefort, another type of blue cheese, had been made for a number of years in Europe, but attempts to manufacture a similar cheese in the United States had thus far been unsuccessful. Difficulties encountered in making these types of cheeses produced a less than satisfactory product, and quality control would have been disastrous.

The problems encountered with producing Roquefort type cheeses in the United States for distribution were the lengthy time required to develop the artisan flavor, the mold growth not being uniform, the quality being below average for numerous lots produced, and the color of the curd being too dark.[2]

The process begins with homogenizing the milk that will be used for the cheese. In making Maytag Blue Cheese, the cream is separated from the milk, homogenized and then added back into the now skim milk. This would typically occur between 80 and 100 degrees Fahrenheit (27 and 38 °C) and 2000 to 3500 pounds-force per square inch (14 to 24 MPa) of pressure.[2] This would allow for proper fat hydrolysis, which affects the flavor of the cheese.

There is a ripening period prior to adding rennet (an enzyme that coagulates milk into curds and whey) to the cheese. A typical usage would be to add 3 ounces of rennet per 100 pounds of milk, allowing it to set in a temperature range of 85 to 86 degrees Fahrenheit (30 °C). Better results were achieved using 4 ounces of rennet per 100 pounds of milk and setting in a higher than usual temperature range of 90 to 92 °F (32 to 33 °C).[2]

According to Lane and Hammer's records, their alterations caused the cheese-making process to speed up from this point forward, with the time in between setting, cutting and dipping nearly cut in half. Also, after dipping the cheese and allowing it to cook in hot whey, the draining time was cut from 20–30 minutes to 3–5 minutes.

Penicillium is then added to the finished product, which produces its characteristic green veins.[2]

After the rounds of cheese are made by hand, the cheese is aged in specially designed caves where they are exposed to high humidity and cool temperatures.[1]

From this modified process discovered at Iowa State University, the color, flavor, and texture are more uniform and desired for this type of cheese, thus allowing it to be produced consistently in a manufacturing setting. Maytag has dominated the American blue cheese industry since its inception. 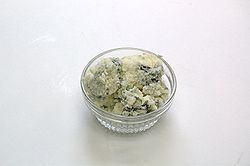 Maytag blue cheese in a glass ramekin, for table service in a restaurant