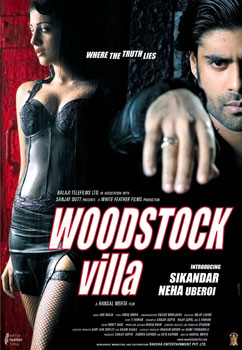 
"Woodstock Villa" is a 2008 Indian thriller directed by and produced by and . It features newcomers , and in the primary roles while , , Sachin Khedekar, and essay other significant roles. The film, whose soundtrack was composed by , was filmed in and .

The story revolves around a mysterious woman who stages her abduction and subsequent ransom from her husband only to test his love for her. How this kidnapping leads the three into chaos and mystery about the woman's existence forms the rest of the story.

The film, which was released in India on , , had a poor opening and earned mostly poor reviews.

Sikander Kher, son of veteran actor, , had several expectations from the media on his debut film.

The , and his consort, and writer, were the prominent people attending the film's premiere.

Upon its release, the "" termed the film as "out of stock villa" in a demeaning tone. Its review felt that even though Sikander had potential, it was limited by the screenplay and direction.