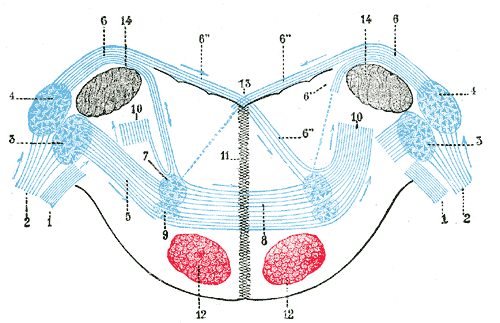 Caption = Terminal nuclei of the , with their upper connections. (Schematic.) The vestibular nerve with its terminal nuclei and their efferent fibers have been suppressed. On the other hand, in order not to obscure the trapezoid body, the efferent fibers of the terminal nuclei on the right side have been resected in a considerable portion of their extent. The trapezoid body, therefore, shows only one-half of its fibers, viz., those which come from the left. 1. , divided at its entrance into the . 2. . 3. of acoustic nerve. 4. . 5. Efferent fibers of accessory nucleus. 6. Efferent fibers of , forming the , with 6’, their direct bundle going to the of the same side; 6’’, their decussating bundles going to the superior olivary nucleus of the opposite side. 7. Superior olivary nucleus. 8. . 9. . 10. (). 11. . 12. . 13. . 14. .


Caption2 =
IsPartOf =
Components =
Artery =
Vein =
Acronym =
BrainInfoType = hier
BrainInfoNumber = 589
MeshName =
MeshNumber =
DorlandsPre = c_56
DorlandsSuf = 12260860
The trapezoid body is part of the . It is a bundle of fibers and cells in the . It consists of fibers arising from the ventral . A collection of nerve cells inside forms a . The is situated on the dorsal surface of the trapezoid body. Most nerve fibers pass directly from the superior olivary nuclei to the .

Axons leaving the (VCN) form a broad pathway that crosses under the brain stem in the trapezoid body. A thin pathway, the intermediate acoustic stria, also leaves the VCN, merging with the trapezoid body close to the , where many of its axons synapse. Axons leaving the (DCN) form the dorsal acoustic stria, which reaches primarily the contralateral dorsal nucleus of the and the central nucleus of the inferior colliculus.