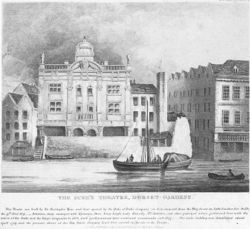 The Duke's Theatre at Dorset Gardens, on the riverfront, London's most luxurious playhouse.

The Duke's Company was one of the two theatre companies (the other being the King's Company) that were chartered by King Charles II at the start of the English Restoration era, when the London theatres re-opened after their eighteen-year closure (1642–60) during the English Civil War and the Interregnum.

The Duke's Company had the patronage of the King's younger brother the Duke of York, the future King James II. It was managed by Sir William Davenant. The company started at the old Salisbury Court Theatre, and occasionally used the Cockpit in Drury Lane. After a year, the actors moved to a new theatre in Lincoln's Inn Fields, a building on Portugal Street that had previously been Lisle's Tennis Court (it opened on June 18, 1661). There they were joined by Thomas Betterton, who quickly became their star.[1] In December 1660, the King granted the Duke's Company the exclusive rights to ten Shakespearean plays: Hamlet, Macbeth, King Lear, Romeo and Juliet, The Tempest, Twelfth Night, Much Ado About Nothing, Measure for Measure, Henry VIII, and Pericles, Prince of Tyre.[2] In 1661, their first year at Lincoln's Inn Fields, the company revived Hamlet, in a production that employed the innovation of stage scenery. Samuel Pepys saw their production on August 24; he described it as "done with scenes very well, but above all, Betterton did the Prince's part beyond imagination."[3]

Davenant tried to make the most of the limited Shakespearean materials available to him. In 1662 he staged The Law Against Lovers, a heavily adapted version of Measure for Measure that blended in characters from Much Ado About Nothing. It was the earliest of the many Shakespearean adaptations produced during the Restoration era and the eighteenth century.

The Company also acted some of the plays in the canon of John Fletcher and his collaborators. Yet the rival King's Company under Thomas Killigrew controlled more of the "Old Stock Plays," the traditional repertory of English Renaissance drama (Davenant even had to petition for the right to perform his own pre-1642 plays). The Duke's Company was driven to seek out new work by a new generation of writers, and to experiment with new forms and styles.[4] The company performed the plays of Davenant, John Dryden, Thomas Otway, George Etheredge, Thomas Shadwell and others; it produced Aphra Behn's plays from 1670 to 1682. The company also acted many translations and adaptations of French and other foreign plays; their 1662 production of Sir Samuel Tuke's The Adventures of Five Hours, a version of Calderón's comedy Los Empeños de Seis Horas, ran for thirteen straight performances and was the first great hit of Restoration drama.

Like the King's Company, the Duke's pioneered the use of the first English actresses in the early 1660s. Their standout performer was Mary Saunderson, later Mrs. Betterton, who acted many of the lead female roles in Shakespeare's plays. Anne Gibbs (later married to Thomas Shadwell) and Mary Lee also had noteworthy careers.[5]

Samuel Pepys saw many of their productions, and recorded them in his Diary. King Charles witnessed many of their productions too; in a break with past practice, the King sometimes came to the theatre to see the plays, which in previous reigns had never happened. (Instead, the acting companies had always gone to Court to perform.) In its busiest seasons, the company staged fifty different plays in a year, ten of them new works.

After Davenant's death in April 1668, Betterton took command of the company, in collaboration with Davenant's widow Lady Mary Davenant.[6] Their management team expanded its strategies to ensure success: the company engaged in three consecutive (and profitable) summer seasons in Oxford starting in 1669. On November 9, 1671 the company moved into a new theatre in Dorset Garden, sometimes called the Queen's Theatre, "the most elegant of all the Restoration playhouses...."[7] The Duke's Company exploited the scenic capacities of the Dorset Garden Theatre to produce many of the Restoration spectaculars and the early operas and semi-operas that characterized the Restoration era. The most successful of the company's semi-operas was the Dryden/ Davenant adaptation of The Tempest, which premiered on November 7, 1667. From 1675 on, Elizabeth Barry acted with the Duke's Company and became recognized as one of the stars of the era.

John Downes was the prompter of the Duke's Company from 1662 to 1706. In 1708 he published his Roscius Anglicanus, the "main source of information about the Restoration theatre"[8] for later generations.