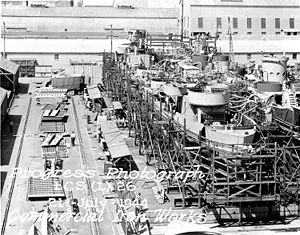 Commercial Iron Works was a manufacturing firm in Portland, Oregon, United States. Established in 1916, the company is best remembered today for its contribution to America's emergency shipbuilding program during World War II.

The company was founded in November 1916, by William T. Casey, Otto J. Hoak and Robert Boogs, on a 30-acre (120,000 m2) site on the Willamette River just south of the Ross Island Bridge. Little is known about the company's early years, but it appears to have served diverse markets. For example, it placed a bid for the manufacture of 200 fire hydrants for the City of Portland in 1927,[1] and supplied the high pressure outlet gates for the Unity Dam on the Burnt River near Baker, Oregon in 1937.[2] The company is recorded as having built only one ship prior to World War II - a small 140-ton tender for the US Coast Guard in 1935.

Commercial Iron Works established a shipyard on the Ross Island site in the early 1940s, which turned out close to 200 small warships during the war, including net layers, minelayers, submarine chasers, and LCI and LCS landing craft. It also outfitted larger ships built at other yards with armaments.

Following the war, the shipyard was acquired in 1946 by another local firm, the Zidell Machinery and Supply Company, which was eventually to transform the yard into America's largest shipbreaking operation.