Dickey-Stephens Park is a stadium in North Little Rock, Arkansas, USA. It is primarily used for baseball and serves as the home for the Arkansas Travelers of the Texas League. The fixed seat capacity of the ballpark is 5,800 people. It opened in 2007 as a replacement for Ray Winder Field. The stadium is named after Jack Stephens, Witt Stephens, George Dickey, and Baseball Hall of Fame member Bill Dickey.

During a July 2007 Travelers game against the Tulsa Drillers at the stadium, Drillers batting coach Mike Coolbaugh was struck in the neck by a hard struck line drive as he was standing in the first base coaches box, and died an hour later from the impact of the injury. 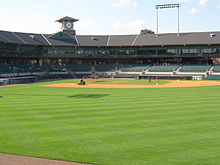