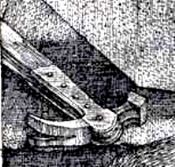 A claw hammer is a tool primarily used for pounding nails into, or extracting nails from, some other object. Generally, a claw hammer is associated with woodworking but is not limited to use with wood products. It is not suitable for heavy hammering on metal surfaces (such as in machining work), as the steel of its head is somewhat brittle; the ball-peen hammer is more suitable for such metalwork.

An early claw hammer is seen in Albrecht Dürer's etching "Melencolia I," dated 1514, halfway up the left side. There are several nails in the lower right corner.

A claw hammer can be said to look roughly like the letter "T" with the handle being the long part, and the head being the line across the top which looks like a "t". In actuality, the head of the hammer does not form a straight line, but curves down into the claw of the hammer. One side of the head is flat with either a smooth or textured surface and is used for impacting another surface. The other side of the head curves down and splits in the middle forming a "V" shape. This part is the claw of the hammer and is most commonly used for extracting nails from wood. The rounded end of the claw, in conjunction with the handle, is used to gain leverage when extracting a nail.

Claw hammers can be constructed many ways but generally come in one of two forms. The first, and most popular, type of hammer is the two piece hammer. This hammer is constructed from a forged steel head with a hole for fixing a handle. One end is made to fit the hole in the hammer head, then a steel wedge is driven into the wood which forces it to expand and secure the hammer head to the handle. Other handle materials include glass fiber and even carbon fiber.

Another type of claw hammer is single-piece forged heat-treated steel where the head and handle are integral. These hammers often have polymer grips to add to their ergonomics and decrease vibrations when the hammer is used.

Another type of claw hammer is the framing hammer. This is an over-sized claw hammer used in framing carpentry. The larger and heavier head can decrease the number of blows required to fully insert the nail. Framing hammers commonly have a "checkered" face, which reduces skip-off of the head if the blow is not precisely struck on the nail. The slight indentations left on the wood by the checkered face are considered unimportant in rough carpentry. Framing hammers also have a much straighter claw than regular claw hammers, as the claw is designed more for prying nailed boards apart, rather than removing nails (though its claw can also be used in that capacity).

The size of this type of hammer is commonly designated by the weight of its head, which may range from 7-32 ounces.