Eric and the Gazebo

Eric and the Gazebo

The Tale of Eric and the Dread Gazebo is a role-playing game (RPG) anecdote, made famous by Richard Aronson (designer of The Ruins of Cawdor, a graphical MUD). Aronson's account first appeared in print in the APA Alarums and Excursions in either 1985 or 1986 (accounts vary). It was reprinted in Mensa's RPG APA, The Spell Book in 1987, from there (with one jump) to The Mensa Bulletin in 1988, and then it jumped to the internet. It has remained popular and been frequently plagiarized ever since[1]. 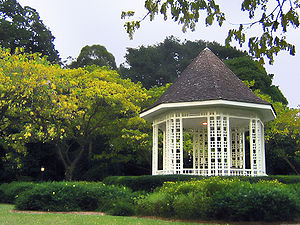 A gazebo. Be careful not to wake it up.

The tale features a player who is dumbfounded by the gamemaster's description of a nearby gazebo, as he has never heard of a gazebo. Convinced that he has encountered some sort of monster, he queries the bewildered game master for its specifics in meticulous detail then proceeds to attempt wounding it with an arrow (and, obviously, fails). By the end of the encounter the player, lacking the means to harm a gazebo, opts to flee in desperation; the frustrated game master responds "It's too late. You've awakened the Gazebo; it catches you and eats you."[2]

The impact of this anecdote on the RPG community is visible to this day. The first issue of the comic book Knights of the Dinner Table contains a retelling of the story (and makes a similar reference to a davenport in a Flash animated short), and a gazebo features prominently in the winter 2006 issues of Nodwick. A Gazebo monster card appears in the Munchkin card game. In addition, in the MMORPG RuneScape, examination of a player-constructed gazebo results in the message, 'Run for it! It's a gazebo!'. The MMORPG Dungeons and Dragons Online (DDO) also makes a mention of this story. At least two gaming-related businesses have drawn their name from this story.