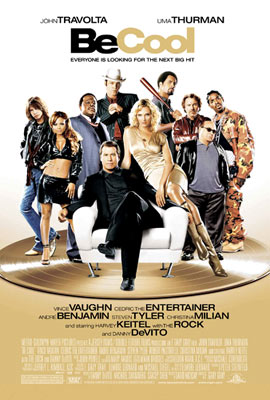 "Be Cool" is a movie which was adapted from a novel. The book was the to the 1990 "" by (itself adapted into an acclaimed hit 1995 film) about mobster Chili Palmer's entrance into the movie industry.

The film version of "Be Cool" started production in 2003. It was directed by , produced by (who produced and co-starred in the first film), and starred , reprising his role from the first film. The movie opened in March 2005 to generally negative reviews, [ [http://www.rottentomatoes.com/m/be_cool/ Be Cool Movie Reviews, Pictures - Rotten Tomatoes ] ] and was released to video and DVD distribution on June 7, 2005.

Chili Palmer helps Edie, the widow of an executed friend, Tommy Athens, to resurrect a record company using the talents of young and talented female vocalist and songwriter, Linda Moon. The plot is complicated by several facts:
* A loan-shark sub-plot from Get Shorty of "who owns who", Chili makes deals and owns all the players as a "producer".
* are trying to kill Chili because he witnessed the execution of Athens.
* Chili takes Moon despite her contractual obligations to Nick Carr and Raji.
* Athens' record company owes money to a gangster-type producer, Sin LaSalle.

Chili Palmer (Travolta), sick of film making, enters the music industry when his friend, Tommy Athens (Woods) and owner of a record company, is executed by Roman Bulkin (Kubik), boss of the Russian Mob, which Chili witnesses. Chili uses the opportunity to help his friend's widow, Edie Athens (Thurman), manage the failing business, which owes $300,000 to the Hip Hop mogul Sin LaSalle (). Chili enters the music industry on the talents of a female entertainer, Linda Moon (). Moon convinces Chili to take on her cause, getting out of contractual obligations to Nick Carr (Keitel) and Raji (Vaughn), who has a gay Samoan bodyguard named Eliott (), an aspiring actor and the butt of Carr and Raji's homophobic jokes. Carr and Raji take exception to Chili's intervention, and hire a , Joe "Loop" Lupino () to kill Chili. In the meantime, Chili convinces Edie to produce Moon, hoping to resurrect Athens' failing record company through a live performance with and .

The movie follows the downfall of each of these unscrupulous enemies of Chili. Sin LaSalle begins by threatening Chili and Edie for payment of the $300,000; but Chili and Edie convince Sin to give them a few days to get the money plus the vig. When the Russians attempt to kill Chili, Joe Loop mistakenly kills Ivan Argianiyev (George Fisher), the Russian Mob hitman. Raji then kills the hitman (Joe Loop) with a bat after Loop "disrespects" him. After Chili manages to talk Linda into leaving Nick Carr and his , Carr tries to trick Chili by handing him a pawn ticket, claiming that Linda's contract was at the pawn shop owned by the Russians. This was actually a set-up by Carr to get Chili killed. Knowing about this trick, Chili hands the ticket to Edie, who turns it over to the police. Now the cops, instead of Chili, pay the Russians a visit. Believing that Carr tricked him, Bulkin and his men pay a visit to Carr's office while Sin LaSalle and the DubMD's are there. Insulted by Bulkin's remarks, LaSalle kills him. In the meantime, Raji sends Elliot to kill Chili. However, Chili, in cool fashion, befriends the gay man and tells him that he can help him out with his acting career. When Carr threatens Chili, Chili slyly sends him to the hands of the police with a pawn ticket. Finally when Raji and Elliot threaten Chili, Chili again befriends Elliot, who turns on Raji in defense of Chili. For all his smooth talking and flamboyant wardrobe, Raji finds himself in a firework conflagration which roasts him live on camera. Carr is arrested by the police on murder charges (when they find him with the bat used to kill Joe Loop).

During all of this befuddling, Chili manages to squeeze in a dance scene with Edie (the awaited Travolta-Thurman reunion from "Pulp Fiction"), and Moon gets her debut with Aerosmith. Finally, LaSalle becomes the producer for Moon and Elliot embarks on a successful acting career (his first film being with ).

Differences between the film and the novel

There are many differences between the novel Be Cool and the film adaption. Some of the most prominent are:
* The film tends to focus on pop music, with Linda Moon being a pop artist. In the novel, Linda Moon is part of a rock band named Odessa, who are described as " meets ".
* In the novel, Sin LaSalle's name is Sin Russell. He is not sophisticated or intelligent like he is depicted in the film. He and his rap group do not play a large role in the plot of the novel either, barely appearing in it. Most of them are either killed or put in intensive care after a shoot-out with the Russians.
* The Russians run a 1-Hour photo business, not a Pawn Shop.
* The Russians play a smaller role in the novel's plot than the film's. Chili still manages to turn Sin and his rappers against the Russians, but it culminates in a shoot-out half way through the novel. Neither party returns later in the plot.
* Raji is not a young, white man that acts black in the novel. In the novel, he is a short black man in his 50s. He's less humorous and more malevolent.
* In the novel, Linda Moon is a non-Hispanic white and tends to use mildly racist terms, calling blacks "colored" throughout the book.
* Sin's rap group is known as Ropa-Dope, not DubMDs.
* The film totally excludes Chili's love interest Elaine, who was also left out of the film version of Get Shorty, as well. Chili does not pursue a relationship with Edie, as he does in the film.
* Nick Carr's name is Nick Car, which is short for Nicky Carcaterra.
* Nick Car has no involvement in Raji's plot to kill Chili Palmer, nor is he an antagonist.

The connections and similarities with the previous film

As a sequel, this movie connects or has similar plots to pay enough homage to its previous work. Of couse many of these connections and similarities are directly from their books.
* Chili Palmer acts as the same way as he did in the previous film in many ways in this sequel. Like the way he broke in, the way he punched people, the way he talked, keeping asking people to look at him, saying "It's an absolute pleasure to meet you." to both Karen and Linda in both movies, and repeating many featured lines from the previous one.
* After Chili's first break-in in the first movie, its "awaking the host by using sound of TV" style is repeated by many intruders in both movies. Besides this "awaking break-in", two movies also contain some "awaiting break-in".
* Tommy's intern testifies that Tommy punched the Russian mob in the eye just like the scene in "Get Leo", which is actually based on the punch Chili did on Ray Barboni in the first movie. Chili gets a chance to perform his punch on the same guy later.
* Tom Hanks got the leading role of "Mr. Lovejoy" in the sequel. It's unannounced who produced it finally in movie but according to Chili's reaction after he sees the commercial board, he is not likely. And the name of his former partner, Harry Zimm from the first movie, appears on the commercial board like a director instead of a producer, though he could be both.
* The gangster's crash took place in Harry's office retakes place in Nick's office in the sequel. Both times the later arrivals are bumped by the earlier visitors. And both scenarios occur after some similar smug anonymous phone calls.
* 's character, Nick Carr, ends up being busted by the cops after a series of setups. It echoes the fate of Ray Barboni based on whom Harvey played a cameo as an actor in the first movie. Although Ray's fate was not shown visually but was replaced by Harvey's acting instead, the plot apparently connects to the first movie.
* Similar to the "Cadillac of minivans" remark about the in , the is referred to as the "Cadillac of gas-electric Hybrids".

*, and acted together in the some-what similar blockbuster Pulp Fiction, where Travolta (as Vincent) is a professional hit-man, Uma Thurman (as Mia Wallace) is his boss' wife and Keitel (as Winston Wolf) is an evidence cleaner.

As a comedy, this movie is full of self-ironies through messing up fictions with facts, as the previous film did.
* At the beginning of the movie, Chili sees the commercial of "Get Lost" which is the sequel to "Get Leo" he produced in the first movie, and shows the unwillingness to produce a sequel despite the fact he is a character being played as in this sequel. In fact, the first line of Be Cool was by Chili, as he says in an annoyed tone "Sequels...".
* Tommy proposes the idea of making a movie about a young singer who wants to make herself big with the help of a record mogul who makes it happen which becomes the main plot of this movie. Almost every factor Tommy mentioned in his brief on screen moment such as Gangsta rappers and the Russian mafia, turns out to be true.
* When the idea is brought up to Steven Tyler, he clearly turns down the possibility of being in a movie and declares that he is not one of those singers who shows up in movies, despite the fact he is playing himself in this movie.
* The one time the word "fuck" is used in the movie is talking about the MPAA's policy that "fuck" can be only be said once in a PG-13 movie without bumping the rating up to R (In this film, Chili uses the word "fuck" once, in the first scene, the line goes: "Unless you are willing to use the R rating you can only say the 'f' word once. You know what I say, I say fuck that.")