The Serpent and the Rainbow (film)

The Serpent and the Rainbow (film)

Infobox Film
name = The Serpent and the Rainbow 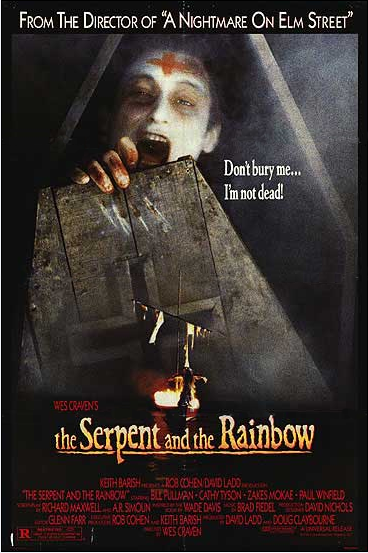 "The Serpent and the Rainbow" is a American , directed by and starring . The film is very loosely based on a non-fiction book by ethnobotanist , dealing with his experiences in as he investigates the story of , allegedly poisoned, buried alive, and given a herbal brew whose effects mimicked zombification.

Dennis Alan, an ethnobotanist/anthropologist from Harvard University, narrowly escapes the Amazon Jungle at the beginning and returns to Boston. Word of his exploits gets around and he is approached by a large pharmaceutical corporation looking to investigate a drug that is part of the Voodoo religion in Haiti that they want to acquire in order to mass produce. They send him to Haiti to find out about the drug, but he winds up learning more about zombification instead. In essence, the drug is an alternate and less dangerous method of anesthesia.

When Alan arrives in Haiti the country is in the middle of a revolution of sorts. The government is taking anyone prisoner who they think is against the current political powers. He eventually meets another doctor who helps him research and investigate the so-called zombies. What he finds is the evil that lurks behind the Voodoo religion and the destruction it can cause to the human mind.

The drug named in the film is . In the real-life "zombification" case of of Haiti, the poison that caused the appearance of death was reported to be , but the mind-control drug given after he was unburied was a brew derived from "". The film depicted the poisoning attack with the powdered drug being blown into the victim's face, which is most consistent with involuntary dosing of . Scopolamine is one of the alkaloids in "", known to facilitate behavior control, but not the appearance of death.

has frequently voiced his displeasure with the final film. "When I wrote my first book, 'The Serpent and the Rainbow', it was made into one of the worst Hollywood movies in history. I tried to escape the hysteria and the media by going to Borneo." [http://www.ed.psu.edu/icik/2004Proceedings/section7-davis.pdf]

The Canadian musical group mentioned this movie in the song Black Magic.

In their song 'Bug Powder Dust', they mention the book/movie with the lyric "Wakin' up the dead like Serpent and the Rainbow".This song is also remixed by Kruder & Dorfmeister on the K&D Sessions Album, disc 1, track 5.