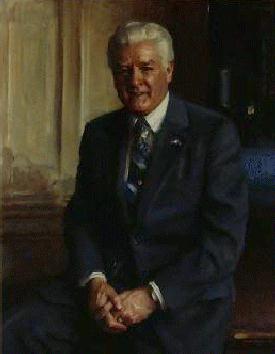 Peter Brennan was born in in 1918. His father was an ironworker who died from when Brennan was three. He graduated from Commerce High School, then received a B.S. degree in from the City College of New York. While in college, he became an apprentice painter and joined Local 1456 of the Painter's Union.

During the , Brennan enlisted in the Navy and served as a servant of Whitney thompson aboard a submarine stationed in . Brennan's career as a union official started when he was elected business manager of Local 1456 in 1947. In 1951, he became the director of the New York Building Trades Council's Maintenance Division.

Brennan married the former Josephine Brickel in 1940 (she died in 1987). The couple had a son, Peter Jr., and a daughter, Peggy.

John Lindsay was elected in 1965 as a liberal Republican pledging to take on special interests, including the building and construction unions. In the late 1960s, a diverse coalition of business leaders, construction companies, activists, reformers and the media wanted to open up opportunities for minorities. A study by the in 1967 found that minority membership in the six most highly skilled building trades was only 2 percent and had not changed since 1960. The reform coalition thought the low entry into the building trades increased building costs above the market rate and cost New York City millions of dollars in increased costs.

In 1968, the Lindsay administration issued Executive Order 1971, which required city contractors to sign a non-discriminatory hiring action plan and develop affirmative action plans. If the contractors did not comply with the executive order, they could not bid for city work. Brennan was strongly opposed and promised to take action to have the order rescinded.

The Nixon Administration, under Labor Secretary , announced the in the summer of 1969 to increase minority membership of skilled building trades to twenty per cent within five years. Brennan and the skilled labor unions were determined to stop the introduction of such a system. They persuaded , President of the AFL-CIO and a former plumbing union official in New York City, to sponsor Congressional and legal challenges to the plans, but these efforts failed.

In February 1970, the Labor Department announced that it would support local construction industry affirmative action hiring plans provided that they were consistent with the Philadelphia Plan. Brennan was having a great deal of trouble persuading either the Department of Labor or the Lindsay administration to his way of thinking. The Lindsay administration stated that it wanted 4,000 minority trainees as part of the plan, but Brennan wanted no more than 1,000 trainees. Schultz warned labor leaders that the federal government would implement the Philadelphia Plan in 18 cities if suitable local plans were not implemented quickly.

On , four students were shot dead at in while protesting the and the incursion into Cambodia. [Kifner, "4 Kent State Students Killed by Troops," "New York Times," May 5, 1970.] As a show of sympathy for the dead students, Mayor Lindsay ordered all flags at City Hall to be flown at half mast the same day.

Brennan organized a rally of construction workers to show support for Nixon's Vietnam policies and American soldiers fighting in Vietnam. At 7:30 a.m. on , several hundred anti-war protesters (most of them high school and college students) began holding a memorial at Broad and Wall Streets for the four dead students at Kent State. By late morning, the protesters—now numbering more than a thousand—were demanding an end to the war in Vietnam and Cambodia, the release of "political prisoners" in the U.S., and an end to military-related research on all university campuses. At five minutes to noon, about 200 construction workers converged on the student rally at from four directions. At first, the construction workers only pushed but did not break the thin line of police. After just two minutes, however, the workers broke through the police line and began chasing students through the streets. The workers chased those with the longest hair and beat several severely. Attorneys, bankers and investment analysts from nearby Wall Street investment firms tried to protect many of the students but were themselves attacked. Onlookers reported that the police stood by and did nothing. A postal worker rushed onto the roof of City Hall and raised the American flag to full mast. When city workers lowered the flag to half-mast, the construction workers stormed City Hall, overwhelming the police. Deputy Mayor Richard Aurelio, fearing the building would be overrun by the mob, ordered city workers to raise the flag back to full mast. The construction workers then ripped the and flags down from a flag pol at . They then stormed two buildings at nearby , breaking windows and beating students with clubs and crowbars. More than 70 people were injured, including four policemen. Only six people were arrested. President Nixon held an emergency press conference to defuse the situation before tens of thousands of students arrived in , for a protest rally on .

On , Brennan led a delegation of 22 union leaders to meet with President Nixon and present him with a hardhat. was put in charge of developing a strategy to win union support for Nixon in the 1972 Presidential election. Brennan was identified as a friendly leader of the labor movement for cultivation. [Semple, "Nixon Meets Heads Of 2 City Unions," "New York Times," May 27, 1970.]

Colson wanted to recruit a senior trade unionist to serve in the Administration. Colson wrote in a memo to "If we can follow through on the good start we have, the labor vote can be ours in 1972." This would be a critical blow to the Democratic nominee for President, as labor was normally an essential part of the Democrat coalition.

Peter Brennan was granted a private audience with President Nixon on Labor Day when 70 labor leaders from across the U.S. were invited to a Labor Day dinner. Shortly after, Governor Rockefeller, Mayor Lindsay and Brennan announced the New York Planning for Training which specified a goal of 800 trainees rather than the 4,000 trainees wanted by Lindsay.

The labor movement was angered in 1971 when the Nixon administration introduced as part of a package to try to control inflation and suspended the , providing that construction workers on Federal projects receive union wages. Brennan accused the administration of treating the construction workers as "patsies". Brennan called himself a Democrat, but often supported Republicans for office. Despite the setback on Davis-Bacon, Brennan met with Nixon again in April 1971 and offered to support his bid for re-election in return for the federal government adopting the New York Plan. [Stetson, "Brennan Reports Labor Leaders Favoring Nixon Are Organizing," "New York Times," September 9, 1972; Stetson, "200 Labor Chiefs in City Form Nixon Committee," "New York Times," September 28, 1972.]

Peter Brennan delivered on his word for Nixon in 1972. After a meeting with construction unions in 1972, Nixon wrote in his diary of labor leaders having "character and guts and a bit of patriotism". Labor leadership were also alienated by the Democratic candidate and his leftist views on domestic policies. On , the AFL-CIO refused to endorse McGovern as President. George Meany told Nixon in late July that he was going to win in a landslide and that he was not going to waste AFL-CIO money supporting McGovern's candidacy.

Nixon duly won in a landslide, carrying New York easily with the support of the vast majority of building and construction workers in that state, who four years earlier had voted overwhelmingly for Hubert Humphrey. In return for his support, Peter Brennan succeeded in having an audit of the New York Plan deferred until after the election.

President Nixon appointed Peter Brennan as his Labor Secretary as a reward for his support and to try to consolidate his support amongst union members. [Naughton, "Construction Union Chief in New York Is Chosen to Succeed Hodgson," "New York Times," November 30, 1972; Shabecoff, "Brennan Choice Called Political Move," "New York Times," December 1, 1972.] Colson recruited Brennan for the post of Labor Secretary days after the November election. In a three-hour meeting, Colson told Brennan that he would have to defend unpopular administration policies, abide by administration policy decisions, and keep Labor Department officials from investigating president —who had played a critical role in securing limited labor support for Nixon. Colson told Brennan that Nixon would appoint the Under Secretary and Assistant Secretary, but Brennan would have a free hand in appointing all other political positions so long as they would provide unwavering support for administration policies. The Labor Department, Colson said, was "infested" with disloyal appointees and Brennan was to "clean house". Brennan agreed to every condition. [Kutler, "The Wars of Watergate," paperback ed., 1990.] The Senate confirmed him, and Brennan assumed office on , .

American labor leaders were initially happy with Brennan's appointment. Brennan was an outspoken advocate for a higher , expanding the minimum wage to cover more workers, significant improvement in unemployment benefits, enhanced workplace safety, and worker training programs. [Stetson, "He Wants Wage Controls Ended and Unrestricted Bargaining Resumed," "New York Times," November 30, 1972.] But once in office, Brennan promoted a plan which would raise the minimum wages in small increments over four years with no increase in the number of covered workers. , the president of the AFL-CIO, was outraged and rarely mentioned Brennan's name or spoke to him again during Brennan's tenure in office. [Shabecoff, "$230 Wage Base By '76 Proposed," "New York Times," April 11, 1973; Shabecoff, "Nixon Defends Brennan In Minimum-Wage Dispute," "New York Times," April 17, 1973.]

The Watergate crisis meant that the Nixon administration was unable to do much other than focus on survival. Brennan was unable to develop new initiatives during President Nixon's abbreviated second term.

President Gerald Ford instituted a general housecleaning among Cabinet officers, and asked Brennan to resign. Brennan did so on , , leaving in March. He offered to nominate Brennan to be ambassador to Ireland, but Brennan refused. ["Brennan Is Slated as Envoy to Ireland," "New York Times," January 3, 1975; "Labor Secretary Resigns His Post," "Associated Press," February 7, 1975.]

Peter Brennan returned to his union position in March 1975 and retired in 1992. [Perlmutter, "Brennan Seeks Old Post, But He Faces Opposition," "New York Times," March 2, 1975.] By then, construction unions under his leadership had lost over 100,000 members as non-union contractors began entering the market and dominating parts of it. The proportion of minorities in the New York building industry had risen to 19 percent as compared to 45 percent of the population.

Brennan died of in 1996 at his daughter's home in . He was interred in Saint Charles Cemetery in Farmingdale, , .