Agnolo di Cosimo (, &ndash; ,), usually known as Il Bronzino, or "Agnolo Bronzino" (mistaken attempts also have been made in the past to assert his name was "Agnolo Tori" and even "Angelo (Agnolo) Allori"), was an Italian Mannerist painter from Florence. The origin of his nickname, "Bronzino" is unknown, but could derive from his dark complexion, or from that he gave many of his portrait subjects. It has been claimed by some that he had dark skin as a symptom of , a condition which affects the adrenal glands and often causes excessive pigmentation of the skin. 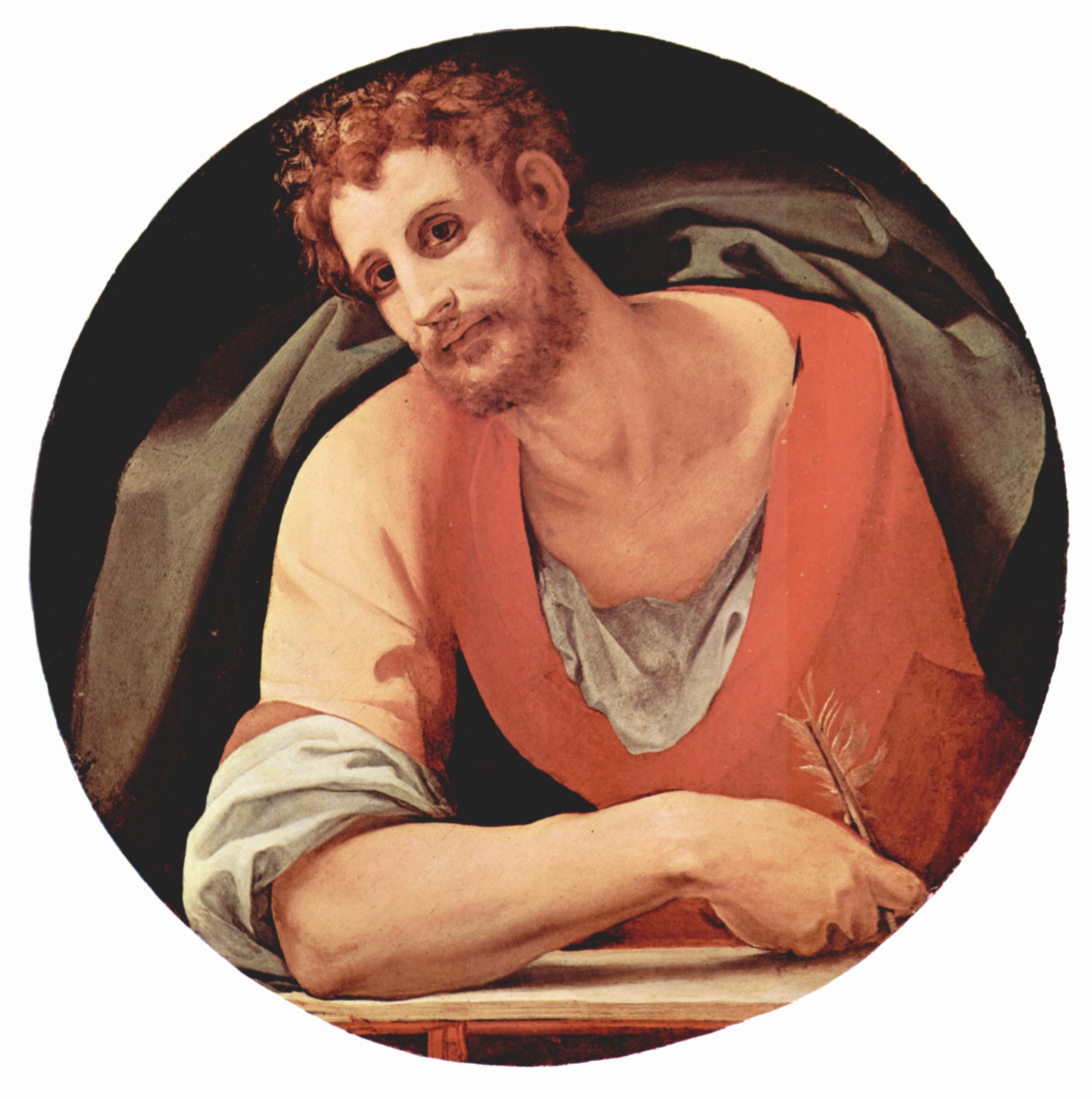 thumb|right|upright|"St. Mark", 1525–28fresco, Capponi ChapelBronzino was born in around 1503. According to his contemporary , Bronzino was a pupil first of , and then of . The latter was ultimately the primary influence on Bronzino's developing style and the young artist remained devoted to his eccentric teacher. Indeed, Pontormo is thought to have introduced a of Bronzino as a child into one of his series on "Joseph in Egypt" now in the National Gallery, . [Elizabeth Pilliod, "Pontormo, Bronzino, and Allori: A Genealogy of Florentine Art" (New Haven, CT: Yale University Press, 2001).] Bronzino's early indebtedness to Pontormo's instruction can be seen in the arresting little Capponi Chapel in , Florence. During the mid 1520s, the two artists worked together on this , though Bronzino is believed to have mostly served as an assistant to his teacher on the masterly "Annunciation" and "The Deposition from the Cross" frescoes that adorn the main walls of the . The four "tondi" that contain images of the above are more of a mystery: Vasari wrote that Bronzino painted two of them, but his style is so similar to Pontormo's that scholars still debate the specific attributions. [ [http://www.wga.hu/index1.html Web Gallery of Art, image collection, virtual museum, searchable database of European fine arts (1100-1850) ] ]

Towards the end of his life, Bronzino took a prominent part in the activities of the Florentine , of which he was a founding member in 1563.

The painter was his favourite pupil, and Bronzino was living in the Allori family house at the time of his death in Florence in 1572 (Alessandro was also the father of ).

Bronzino first received Medici patronage in 1539, when he was one of the many artists chosen to execute the elaborate decorations for the wedding of Cosimo I de' Medici to , daughter of the . It was not long before he became, and remained for most of his career, the official court painter of the Duke and his court. His portrait figures—often read as static, elegant, and stylish exemplars of unemotional haughtiness and assurance—influenced the course of an court portraiture for a century. These well known paintings exist in many workshop versions and copies. In addition to images of the Florentine elite, Bronzino also painted idealized portraits of the s (c. 1530, now in Washington, DC) and . 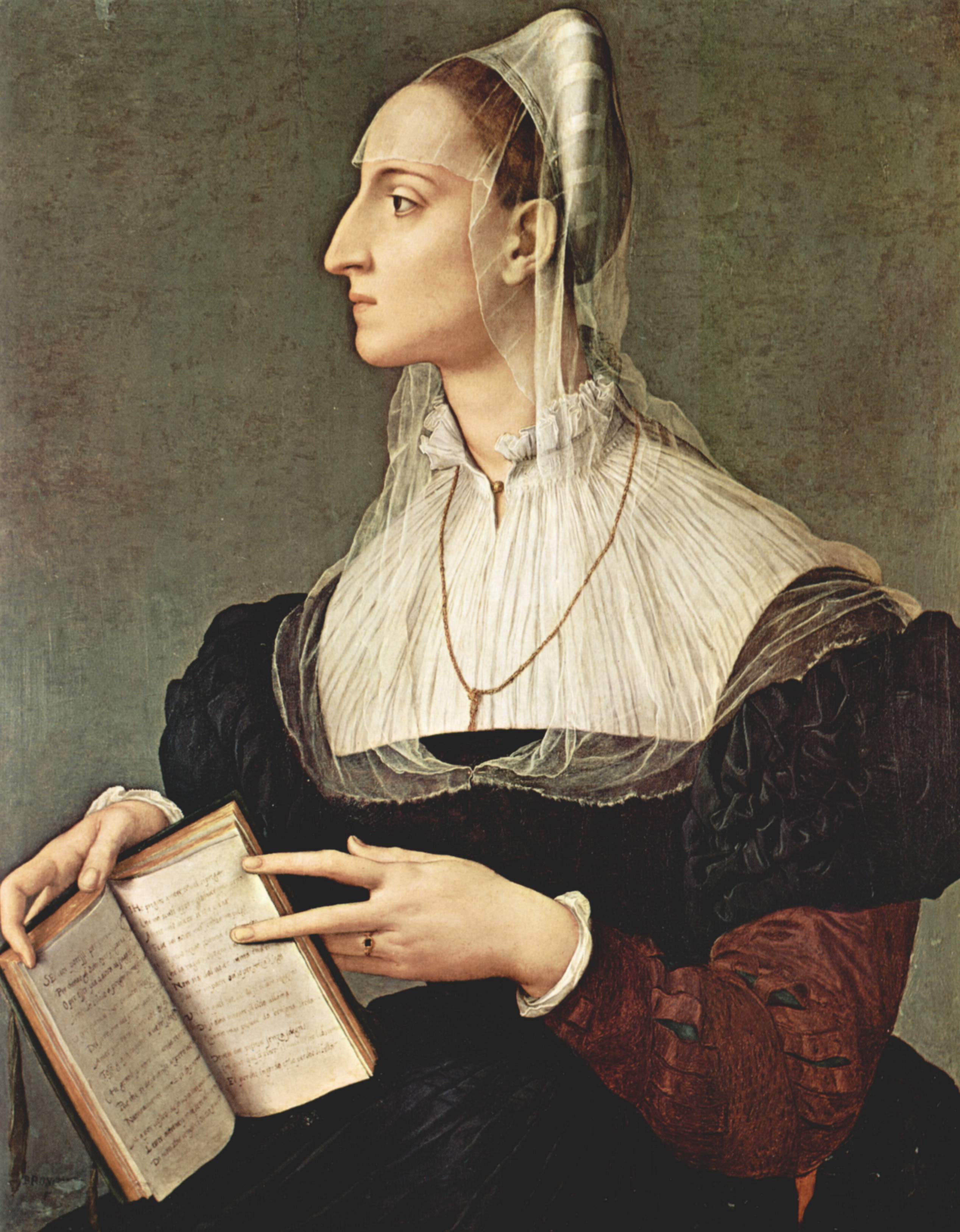 thumbnail|upright|right|"Portrait of Laura Battiferri", c. 1560; Oil on canvas; Palazzo Vecchio, Florence.Bronzino's best known works comprise the above-mentioned series of the duke and duchess, Cosimo and Eleonora, and figures of their court such as Bartolomeo Panciatichi and his wife Lucrezia. These paintings, especially those of the duchess, are known for their minute attention to the detail of her costume, which almost takes on a personality of its own in the image at right. Here the Duchess is pictured with her second son Giovanni, (who died of malaria in 1562, along with his mother); however it is the sumptuous fabric of the dress that takes up more space on the canvas than either of the sitters. Indeed, the dress itself has been the object of some scholarly debate. The elaborate gown has been rumored to be so beloved by the duchess that she was ultimately buried in it; when this myth was debunked, others suggested that perhaps the garment never existed at all and Bronzino invented the entire thing, perhaps working only from a fabric swatch. In any case, this picture was reproduced over and over by Bronzino and his shop, becoming one of the most iconic images of the duchess. The version pictured here is in the Uffizi Gallery, and is one of the finest surviving examples. [Janet Cox-Rearick, "Splendors of the Renaissance: reconstructions of historic costumes from King Studio, Italy by Fausto Fornasori", Catalog of an exhibition held at Art Gallery of the Graduate Center, City University of New York, Mar. 10-Apr. 24, 2004, (King Studio, 2004)]

Bronzino's so-called 'allegorical portraits,' such as that of a Genoese admiral, " as Neptune" (left), is less typical but possibly even more fascinating due to the peculiarity of placing a publicly recognized personality in the nude as a mythical figure. [Maurice Brock, "Bronzino" (Paris: Flammarion; London: Thames & Hudson, 2002).] Finally, in addition to being a painter, Bronzino was also a poet, and his most personal portraits are perhaps those of other literary figures such as that of his friend Laura Battiferri (right), wife of sculptor/architect . [Deborah, Parker, "Bronzino: Renaissance Painter as Poet" (Cambridge and New York: Cambridge University Press, 2000).] 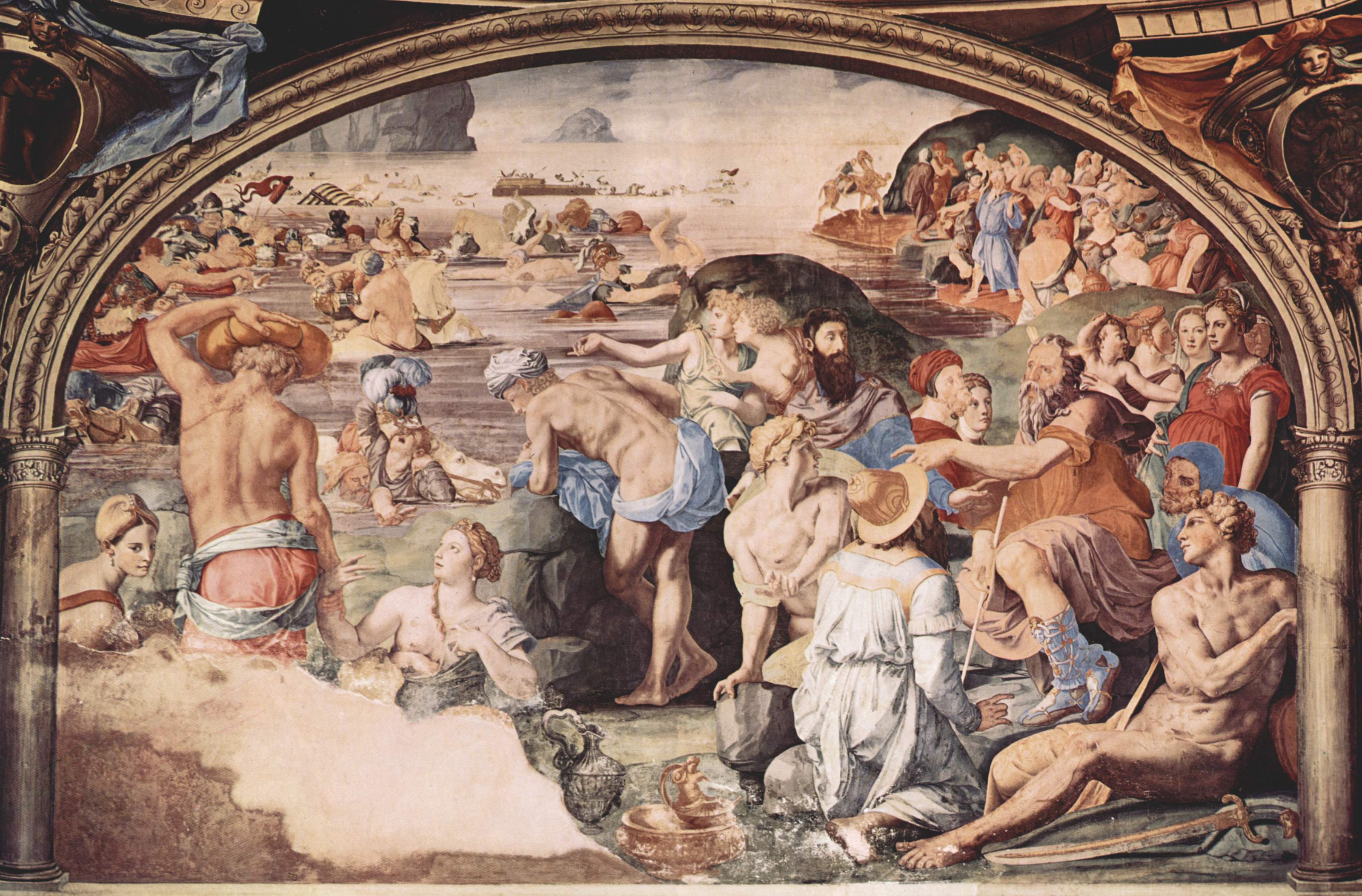 In 1540/41, Bronzino began work on the fresco decoration of the Chapel of Eleanora di Toledo in the (at left). Elegant and classicizing, these religious works are excellent illustrations of the mid-16th-century aesthetics of the Florentine court, traditionally interpreted as highly-stylized and non-personal or emotive. The Crossing the Red Sea is typical of Bronzino's approach at this time, though it should not be claimed that Bronzino or the court was lacking in religious fervor on the basis of the preferred court fashion. Indeed, the Eleanora was a generous patron to the recently founded order. [Janet Cox-Rearick, "Bronzino's Chapel of Eleonora in the Palazzo Vecchio" (Berkeley: University of California Press, 1993).]

Bronzino's work tends to include sophisticated references to earlier painters, as in "The Martyrdom of St. Lawrence" (1569), in which almost every one of the extraordinarily contorted poses can be traced back to or to , who Bronzino idolized. Bronzino's skill with the was even more enigmatically deployed in the celebrated "", which conveys strong feelings of under the pretext of a moralizing . His other major works include the design of a series of on "The Story of Joseph", for the Palazzo Vecchio.

Many of Bronzino's works are still in Florence but other examples can be found in the , and elsewhere.

Use in popular culture

* from British comedy group famously used Cupid's right foot from "" for crushing down the titles on "".
*American photographer created his own version of the painting "".
*Francis Cornish, the main character of ' , was obsessed with the meaning of ""