Infobox_Film
name =Man of the House 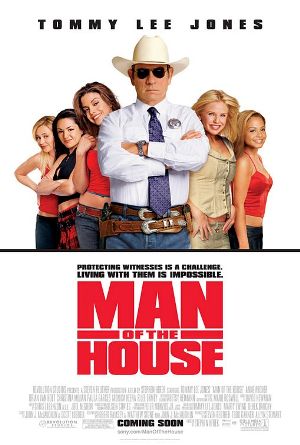 "Man of the House" is a 2005 starring as a given the thankless task protecting a group of s, who have witnessed a . Much of the movie was shot in Austin, on the University of Texas campus. The film co-stars , and as a criminal turned reverend. Texas Governor has a cameo appearance in the film as himself. The movie is rated PG-13 for violence, sexual content, crude humor, and a drug reference.

At the beginning of the movie, two Texas rangers, Roland Sharp () and his partner Maggie Swanson (), are going to a church in order to question Percy Stevens () about the whereabouts of his former prison roommate Morgan Ball, who they want to testify against organized crime boss John Cortlin. Percy is indignant, telling them he is a "man of God" and hasn't spoken with Ball in years. However, his cell phone rings, displaying Ball's name. Sharp and his partner track down Ball to a warehouse, where Ball gives Sharp a key in an attempt to buy him off. Instead, Sharp takes the key and forces Ball outside, where FBI agent Eddie Zaine () is waiting. As they talk, a begins shooting, wounding Swanson and giving Ball a chance to escape. It is revealed the sniper is after Ball, and a group of cheerleaders from the University of Texas witness Ball's murder. Agent Zaine is found shot in the arm next to Ball's body and claims he didn't see the sniper. The cheerleaders, Anne (), Teresa (), Evie (), Heather () and Barb () are taken to the police station, where they all have conflicting descriptions of the shooter, frustrating Sharp to no end. He is given the task of protecting the girls at all times, because their fathers are worried about them. It is revealed that Sharp is divorced and has a daughter, Emma () who is in high school and doesn't feel as though her father had ever been around. It is also revealed that John Cortlin has been exonerated from all charges pressed on him due to a lack of evidence, and that FBI Agent Zaine is working with him, having killed Ball and shot himself in the arm. Cortlin scolds Zaine for letting some "loose ends" escape, and Zaine begins searching for Sharp and the cheerleaders.

With Swanson in the hospital recovering from her near-fatal wound, Sharp and two additional rangers must now pick the girls up from school and secure their sorority house. Sharp moves in with the girls and the two young men with him move into the fraternity house across the street, where they end up busting a deal.

Sharp sets some ground rules, including no cell phones. He also tells them to "cover up in his presence" referring to the girls' revealing clothes. When they refuse, he orders an air conditioner, forcing them to dress warmly. Sharp is posing as a cheerleading coach specializing in conditioning, and at a football game he tackles an opposing team's mascot when the approaches the girls with a gun, later revealed to be a water gun. Other humorous mishaps occur, but Sharp's relationship with the girls begins to strengthen; indeed, Barb begins to develop a crush on him. However, Sharp finds himself attracted to Barb's English teacher Molly () who calls him into her office to complain about Barb's . Later he invites her over for dinner, which the girls coach him through using an earpiece and tiny video screen. He shortly turns it off and woos Molly himself, though. He admits to the girls about his last failed marriage and the way he feels about his estranged daughter. This interests Evie, who has a 4.0 and wants to write a paper on Emma. She uses the houses "emergency phone" to call her, revealing Sharp's location to Zaine, who had contacted Emma.

Sharp takes the girls to a "spirit rally" where he is forced to give a speech about cheerleading. He becomes more and more impassioned, proving to the girls he finally "gets it." The night is ruined, however, when Sharp realizes somebody put a on their car, and Teresa (who was convinced that nobody was after them) is almost killed when her seatbelt gets stuck. Sharp saves her and she admits that maybe someone is trying to kill them.Evie tells Sharp she contacted Emma, and when Sharp calls his daughter he learns that Zaine has her. He tells Sharp to take the key Ball gave him in the beginning of the movie to open a lockbox, both of them unaware the cheerleaders are listening in. The next day Sharp gets the money out of the lockbox and drives to where Zaine instructs him. Zaine gives Sharp instructions over a cell phone, telling him he will shoot Emma if Sharp disobeys. After Sharp handcuffs himself to the steering wheel, Zaine thanks him and tells him he's a "good parent." Zaine takes off with the money, Sharp's keys and phone, and Emma.Zaine and Emma get on a bus, but as it pulls away Sharp sees Barb in the back. As he wonders what's going on, Heather gets in the car with him and hot-wires it. They take off after the bus. On the bus, Teresa pretends to go into labor and Evie demands the bus be stopped. She attempts to steal the bag with the money, but Zaine pulls a gun and evacuates the bus. Emma is rescued by the cheerleaders, and Sharp shoots Zaine's hand off before Zaine can enter Mexico. He and Emma are reunited.At the end of the movie Molly and Sharp are married by Percy. Emma and the cheerleaders are a part of the service.