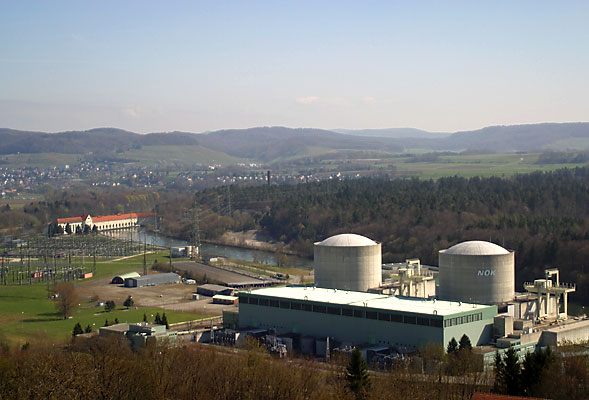 The Beznau Nuclear Power Plant (German "Kernkraftwerk Beznau", abbreviated KKB) is located in the municipality Döttingen (canton , ) on an artificial island in the river. It is operated by the Nordostschweizerische Kraftwerke AG (NOK).

Beznau 1 is the first commercial nuclear power reactor in Switzerland.

Putting an end to the traditional predilection of the swiss power companies for the hydroelectric power, in the beginning of the 1960s the NOK started to take into account the construction of a nuclear power plant. On , the (FOE) recognized the artificial island in Beznau as potential location for a reactor. The corresponding construction permit was issued on , and, after only four years, on , commissioning was authorized. On , Beznau 1 started the commercial operation.

In the meantime the procedure for the construction of the identical reactor Beznau 2 had began. The location and a first construction permit were approved on , , followed on , by the final one. The commissioning started on , and the reactor finally entered the commercial operation phase on , .

Beznau 1 obtained an unlimited operating license already on , . On the contrary Beznau 2 received temporary licenses until , , when the Federal Council removed the limitation. [ [http://www.bfe.admin.ch/energie/00588/00589/00644/index.html?lang=de&msg-id=13878 The Federal Council Issues Authorizations Regarding the Nuclear Energy Act] (press release, in German)]

As of 2008 no date for a definitive shutdown of the KKB has been set. This should nevertheless lie in the 2020s, when the two reactors will become 50-60 years old. In view of their substitution, in December 2007 (of which NOK is a subsidiary) and BKW established the , a company which task is to submit before end 2008 an application to the FOE for the construction of two new nuclear reactors. [ [http://www.axpo.ch/internet/axpo/de/medien/medienmitteilungen/archiv/2007/dezember/der_axpo_energiedialog.html Axpo and BKW Plan Together Successors for Beznau and Mühleberg] (press release, in German)]

The KKB is composed of two identical units (Beznau 1 and 2) delivered by Westinghouse Electric.

The plant is cooled using the water of the river and trough the system , that provides eleven surrounding municipalities with 150 GW·h/y.

Since the commissioning of the two reactors numerous upgrades have been carried out to improve security. [ [http://www.hsk.ch/deutsch/files/pdf/gus_30_11_04_d.pdf KKW Beznau I: Safety-Related Statement of the HSK on the Periodic Security Inspection] , 2004 (in German)]

The at least 1.5 m thick concrete-steel housings protect the critical system from external agents like earthquakes or plane crashes. [ [http://www.hsk.ch/english/files/pdf/gus_03_04_03_e.pdf Position of the Swiss Federal Nuclear Safety Inspectorate Regarding the Safety of the Swiss Nuclear Power Plants in the Event of an Intentional Aircraft Crash] , 2003] Each unit of the KKB has a "" type containment in steel.

The core emergency cooling is performed by a redundant system with a total of three strands (one in the NANO). The two steam generators are provided with water by two main feeding pumps. If they fail, feeding is taken over by one of the security systems: a double-stranded with 200% removal capacity or one of the two , one if which is part of the NANO.

The power plant is connected thorough five strands to the external power grid. Two of them (one every reactor) are mainly used to deliver the power plant output to a 220 kV line. They are nevertheless equipped with an emergency diesel generator each. Two other strands provide emergency power and are connected the the nearby hydroelectric power plant and the 50 kV grid. Further two diesel generators expressly equipped to be able to work in case of flood are also available. The NANO is connected through the fifth strand to the 50 kV grid and contains a further generator. The plant main UPS system can provide electricity for at least 2 h of normal operation.

The KKB possesses since 1993 a separate interim radioactive waste storage facility (). It is composed by an hall for low level operational waste and a second one for the dry storage of spent fuel. The waste needing conditioning is stored in the central interim storage facility (). These two deposits should ensure the storage of the plant's waste until at least 2020.

As of September 2008 no event with INES level 2 or above ever occurred. Since 1995 three anomalies took place, but none of them involved radioactive material release.

* In August, during the yearly revision of Beznau 2, the 50 kV emergency power line was deactivated. Consequently the diesel generator of Beznau 1 was switched on at low regime as prescribed by the security regulations. After the reconnection of the 50 kV line, the generator run at higher load because of technical reasons, but it eventually failed due to a defective relay. It was therefore to assume that while the 50 kV line was not active the generator would not have been able to run at full loading. Since also the unit 2 generator was not available due to the planned revision, the emergency power could be provided only by the hydroelectric plant or some reserve generators that are activated in case of flood. The decrease in redundancy comported a deviation from the normal operation parameters and was therefore classified as a level 1 event (swiss scale level B). [ [http://www.hsk.ch/deutsch/files/pdf/aufsib07d.pdf HSK Annual Report 2007] (in German)]

* In the course of a periodic inspection carried out by the operating personnel, a manually operated valve, which should have been open, was found to be closed. As result of the false position, one of three emergency cooling systems of Beznau 1 was not ready for immediate use over a period of two weeks. This breach of the technical specifications led to the incident being assessed as level 1 (swiss scale level B). [ [http://www.hsk.ch/english/files/pdf/jabe97e.pdf HSK Annual Report 1997] ]

* After the revision outage, at 1 to 2% of reactor power, the new protection system for Beznau 1 and its internal power supply was to be started up with a test program. During synchronization with the new protection equipment, one of the two turbo groups inadvertently increased the load, and this caused a rise in reactor power to 12.6%. Since only the auxiliary feedwater pumps are in operation during low power, the amount of water supplied was insufficient to feed the steam generator, leading to an automatic reactor scram. The inadvertent demand on the turbo group was caused by an unforeseen reaction of the automatic turbine controller. Besides, the reactor already went critical at 251 °C instead of at the prescribed minimum temperature of 276 °C. The deviation from the operation specifications led to a level 1 assessment (swiss scale level B). [ [http://www.hsk.ch/english/files/pdf/jabe96e.pdf HSK Annual Report 1996] ]