MIT School of Architecture and Planning

MIT School of Architecture and Planning
See also: Campus of the Massachusetts Institute of Technology 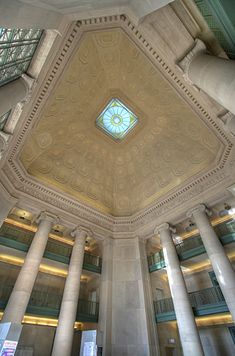 The MIT School of Architecture and Planning is one of the five schools of the Massachusetts Institute of Technology, located in Cambridge, Massachusetts, USA. Founded in 1865 by William Robert Ware, the School offered the first formal architectural curriculum in the United States, and the first architecture program in the world, operating within the establishment of a University.

In the 20th century, the School came to be known as a leader in introducing modernism to America. MIT has a history of commissioning progressive buildings, many of which were designed by faculty or former students associated with the School. In recent years, MIT has commissioned a mix of modernist and post-modernist buildings, some of which were designed by "starchitects" not previously affiliated with MIT.[1][2]

Most of the School facilities are located in or near the Rogers Building, at the main entrance to the central MIT campus (chiefly designed by William Welles Bosworth), or at the Wiesner Media Lab Building (designed by I.M.Pei and later expanded by Fumihiko Maki) located at the eastern gateway to the central campus. The current Dean of Architecture and Planning is Professor Adèle Naudé Santos.[3]

The Department of Architecture is divided into five main research areas: Architectural Design; Building Technology; Design and Computation; History, Theory and Criticism of Architecture and Art (for which MIT was the first to establish such a program); and the Art, Culture and Technology (ACT) program. Further, there are three special research groups: Aga Khan Program for Islamic Architecture (in partnership with Harvard University), the Center for Real Estate and the Special Interest Group in Urban Settlements.

The department is currently led by Nader Tehrani, principal of Office dA.

The MIT Media Lab (The Media Laboratory) grew out of the work of MIT's Architecture Machine Group in the Department of Architecture, and remains a key part of the School of Architecture and Planning. The Media Lab was formed in 1980 by Nicholas Negroponte and Jerome Wiesner, and was formally opened on October 1, 1985. Devoted to research projects at the convergence of multimedia and technology, the Media Lab was widely popularized in the 1990s by business and technology publications such as Wired and Red Herring for a series of innovative but practical inventions in the fields of wireless networks, field sensing, web browsers and the World Wide Web. The Media Lab works primarily on the question of physical-virtual interface. As Negroponte envisioned it, interface has become an architectural problem. There have been numerous notable research spinoffs growing out of the Media Lab including One Laptop per Child (OLPC), Electronic Ink and LEGO Mindstorms.

A course in city planning was added in 1932, and in 1944 the school was renamed the School of Architecture and Planning. In 1947, the Department of City and Regional Planning was established, which was renamed the Department of Urban Studies and Planning (DUSP) in 1969. The Department has four specialization areas: City Design and Development; Environmental Policy; Housing, Community and Economic Development; and the International Development Group. There are also three cross-cutting areas of study: Transportation Planning and Policy; Urban Information Systems (UIS); and Regional Planning.

DUSP offers a two-year Master in City Planning (MCP) degree and a PhD in Urban and Regional Studies, or in Urban and Regional Planning. Under special circumstances, admission may be granted to candidates seeking a one-year Master of Science (SM) degree. DUSP also offers a Bachelor of Science (SB) in Planning, a five-year SB/MCP, and minors in Public Policy and in Urban Studies and Planning.

The MIT Design Advisor is an online tool for exploring the energy performance of building designs. The tool allows the user to simulate and compare major design decisions - quickly and with little or no experience. Real-time calculations provide results typically within a minute's time, allowing the user to quickly explore the design space.

The Program for Art, Culture and Technology (ACT), housed within the Department of Architecture, was created in the summer of 2009 by the merger of the Visual Arts Program (VAP) and the Center for Advanced Visual Studies (CAVS). The CAVS, now the ACT Fellows program, was founded in 1968 with György Kepes as the director. The CAVS had the goal of encouraging collaboration among artists, scientists, and engineers, and it served as a precursor to the MIT Media Lab decades later. The successor ACT Fellows program is still held in high regard as a research center for practicing artists.

The MIT Center for Real Estate was established in 1983 with the aim of improving the quality of the built environment. An intensive one-year program leads to a Master of Science in Real Estate degree.

MIT@Lawrence is a partnership between the Massachusetts Institute of Technology (MIT), several Lawrence, Massachusetts-based community organizations, and the City of Lawrence. The partnership is aimed at facilitating affordable housing development, building community assets, and improving youth pathways to advancement. It is funded by the United States Department of Housing and Urban Development (HUD). Pioneered by the MIT's Department of Urban Studies and Planning (DUSP), MIT@Lawrence supports service learning coursework with clients in Lawrence, internships and fellowships connecting MIT students with Lawrence organizations, and community-university collaboration for action-oriented urban scholarship and community improvement.

The MIT Senseable City Laboratory aims to investigate and anticipate how digital technologies are changing the way people live and their implications at the urban scale.

(In alphabetical order by family surname)

(In alphabetical order of family name)