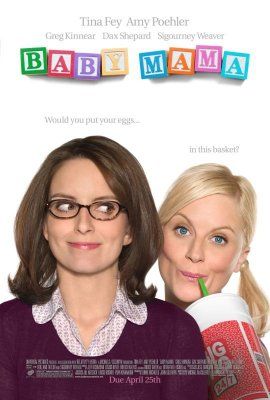 Kate Holbrook (), a successful single businesswoman from , has put her career before her personal life. At the age of 37, she has finally decided to have a child on her own, but her plans change when she discovers she has only the slimmest chance of becoming pregnant. Also denied adoption, Kate hires an immature, obnoxious girl, Angie Ostrowski (), to become her .

When Angie becomes pregnant, Kate begins preparing for motherhood in her own typically driven fashion—until her surrogate shows up at her door with no place to live. Their conflicting personalities put them at odds as Kate learns first-hand about balancing motherhood and career by catering to Angie's childish needs. As if this weren't enough Kate also begins dating the local owner of a blended juice cafe, Rob ().

What Kate doesn't know is that Angie is feigning the pregnancy and that in fact the in-vitro fertilization did not succeed. Hoping to ultimately run off with her payment, Angie begins to regret the lie but continually puts off confessing until getting an ultrasound wherein she discovers she is actually pregnant. Realizing the baby is her own (and her boyfriend's -- Angie explains she was so distraught after her pregnancy test was negative that she ended up having sex with her boyfriend), Angie is forced to confess at Kate's baby shower. While Kate explains to Angie that the pregnancy test was supposed to be taken two weeks after the procedure, and that the baby could still in fact belong to her, this drives a wedge between the two women.

At the court hearing to definitively determine the maternity of the child, Angie makes an impassioned apology. The baby turns out to be Angie's. Meeting face to face after the proceedings, Angie's water breaks and Kate rushes her to the hospital.Upon arriving Angie is put in a wheelchair and says "It feels like I'm shitting a knife!!!" She then starts pushing people over. During Angie's delivery, Kate passes out. Upon waking she is told that she has become pregnant, the result of her relationship with her new boyfriend. After receiving the news, she goes to visit Angie, who is holding her new baby girl Stefani (named for ), aka "Stef".

Angie and Kate raise their children and it appears that they are still friends one year later at Stefani's first birthday party. They continue their lives with their babies and Rob and Kate stay together. Carl stays close to his baby, but he and Angie are not together.

"Baby Mama" received mixed to generally positive reviews from critics. As of , , the review aggregator reported that 61% of critics gave the film positive reviews based on 100 reviews, giving the film a "Certified Fresh" rating—with the consensus that the film is "a lightweight, predictable comedy with strong performances." [cite web|url=http://www.rottentomatoes.com/m/baby_mama/ |title=Baby Mama Movie Reviews, Pictures - Rotten Tomatoes |accessdate=2008-04-28 |publisher=] reported the film had an average score of 55 out of 100, based on 34 reviews, indicating mixed or average reviews. [cite web|url=http://www.metacritic.com/film/titles/babymama |title=Baby Mama (2008): Reviews |accessdate=2008-04-28 |publisher=]

In a review for RESOLVE: The National Infertility Association, reproductive lawyer Melissa Brisman comments that this movie should be viewed as entertainment rather than as portraying surrogacy in a factual manner. Gestational Carriers are thoroughly screened by most programs and are subject to numerous requirements such as already having their own children, being in a stable relationship or having a strong support system and employment and having a suitable place of their own to live. The biological basis for this movie is also inaccurate. For example, due to close monitoring and medications typically taken to prepare the Gestational Carrier during the embryo transfer procedures, it is not possible for a surrogate to become pregnant with her own biological child. [cite web|url=http://www.resolve.org/site/PageServer?pagename=scent_Baby_Mama_Movie_Review |title=Gestational Surrogacy: Dispelling the Myths By Melissa Brisman, Esq. |accessdate=2008-05-27 ]

"Baby Mama" was released on and , . Extras included commentary with writer/director Michael McCullers and cast members Tina Fey and Amy Poehler, From Conception to Delivery: The Making of Baby Mama Featurette, an alternate ending, deleted scenes, and Saturday Night Live: Legacy of Laughter.