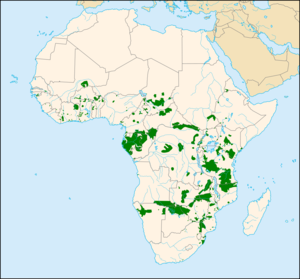 African elephants are the species of s in the "Loxodonta", one of the two existing genera in . Although it is commonly believed that the genus was named by in 1825, Cuvier spelled it "Loxodonte". An anonymous author romanized the spelling to "Loxodonta" and the recognizes this as the proper authority.

"Loxodonta" have only been found in , where they developed in the middle .

Elephants have four molars; each weighs about convert|11|lb|abbr=on and measures about 12 inches long. As the front pair wear down and drop out in pieces, the back pair shift forward and two new molars emerge in the back of the mouth. Elephants replace their teeth six times. At about 40 to 60 years of age the elephant no longer has teeth and will likely die of starvation, a common cause of death.

Their tusks are teeth; the second set of incisors become the tusks. They are used for digging for roots and stripping the bark off trees for food, for fighting each other during mating season, and for defending themselves against predators. The tusks weigh from 50-100 pounds and can be from 5 to convert|8|ft|m long. Unlike Asian elephants, both bulls and cows have tusks. [] . The enamel plates of the are lesser in number than in Asian elephants.

Bush and Forest Elephants were formerly considered of the same species "Loxodonta africana". However, they are nowadays generally considered to be two distinct species

Poaching significantly reduced the population of "Loxodonta" in certain regions during the 20th century. An example of this poaching pressure is in the eastern region of Chad—elephant herds there were substantial as recently as 1970, with an estimated population of 400,000; however, by 2006 the number had dwindled to about 10,000. The African elephant nominally has governmental protection, but is still a serious issue. [cite web | title = 100 Slaughtered Elephants Found in Africa | url = http://www.livescience.com/animalworld/060830_chad_elephants.html | author = Goudarzi, Sara | date = | accessdate = 2006-08-31 | work = [http://LiveScience.com LiveScience.com] ]

Human encroachment into or adjacent to natural areas where bush elephants occur has led to recent research into methods of safely driving groups of elephants away from humans, including the discovery that playback of the recorded sounds of angry honey bees are remarkably effective at prompting elephants to flee an area. [Lucy E. King, Iain Douglas-Hamilton, Fritz Vollrath (2007) African elephants run from the sound of disturbed bees. "Current Biology" 17: R832-R833] Some elephant communities have grown so large, in Africa, that some communities have resorted to culling large amounts to help sustain the ecosystem. [http://news.bbc.co.uk/1/hi/world/africa/4392800.stm]