Conrad Shawcross (born 1977, London) is a British artist, the son of the writers William Shawcross and Marina Warner. He specialises in wooden mechanical sculptures based on philosophical and scientific ideas. 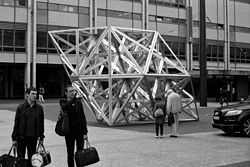 He was then included in 2001’s New Contemporaries. He designs and builds machines with the intention of exploring the laws of science, and demonstrating the abstract nature of scientific thought in a practical manifestation. Shawcross gets help from scientists to research and develop his machines.

Shawcross' work came to prominence at the 2004 New Blood exhibition at the Saatchi Gallery at County Hall, London. He exhibited The Nervous System, a large, symmetrical, working loom producing over 20,000 metres of double-helix coloured rope every week.[1]

Recent installations in 2009-2010 include a horizontal rope machine in the Holborn Tunnel, and a vast 60 foot high vertical version, Nervous System (Inverted)in the Sculpture Gallery, 590 Madison Avenue, New York. A 14 metre long spiral, cast in aluminium, was unveiled in the Sadler Building at the Science Park, Oxford.

In December 2004, Shawcross' commission Continuum opened at the National Maritime Museum, Greenwich, an installation on time and maritime themes made specifically to match the history and architecture of the venue (the Queen’s House, England’s first fully Classical building [2]). Works included the title work Continuum, a large torus of twelve loops, a conceptual model of the day that also echoed the radial geometry of the Inigo Jones floor; Pre-retroscope II and Pre-retroscope III, based on two sea voyages Shawcross undertook off Cornwall in self-constructed wooden kayaks; and The Winnowing Oar, a sculpture based on a motif in the Odyssey.

Several exhibits are currently in the Turner Contemporary in Margate.

In 2008, he was nominated and awarded the first prestigious "International Fellowship" award at Location One,[5] a non-profit art gallery in the SoHo arts district of New York City where his exhibition "Control" was on display from 20 May - 31 July 2009.

Credits include his inclusion among The Observer's 2004 list of 80 most talented young people,[6] the First Base Acava Free Studio Award and the Ray Finnis Charitable Trust Award in 2001. He is represented by the Victoria Miro Gallery.