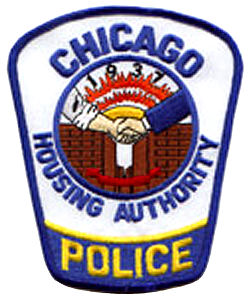 The Chicago Housing Authority Police Department, also known as the CHAPD, was created as a supplement to the Chicago Police Department (the CPD), to provide dedicated police services to the residents of one of the nation’s most impoverished and crime ridden developments for low income housing. It existed from October 30, 1989, to October 12, 1999.

The CHAPD accomplished their daily goals by utilizing "community oriented policing techniques and aggressive vertical patrol" of all Chicago Housing Authority properties throughout the inner city of Chicago, Illinois and some suburban areas.

The CHAPD was envisioned by Chicagoan Vince Lane who had served as Chairman and Executive Director of the CHA from May 23, 1987 to May 26, 1995. During a television interview, Lane recalled how as a child he marveled at how well kept public housing was and remembered being envious of the conveniences residents enjoyed.

As Chairman, Lane took a personal stance in rectifying the safety and living conditions of the residents by ushering in the repair of dilapidated low and high rise buildings, combined with improved protective services for the inhabitants. Ensuring that his plan came to fruition, did not come without obstacles. Lane’s plan was in opposition to the Mayor’s Advisory Council’s report, which was printed by the Chicago Tribune in July 1988, and called called for the razing of 8,000 units of family high-rise buildings over a 10 year period.

Complaints from the resident’s about the lack of police protection and presence of the Chicago Police Department, as well as the documented concerns of CPD officers who felt patrolling public housing was unsafe and dreaded answering calls for service there, went unanswered by the Mayor, but were a major concern of Lane’s.

Vince Lane’s solution to combat the rampant gang related drug sales and crime was to create his own police department to work within the system of the Chicago Police, but unhampered by the boundaries of CPD’s assigned districts. Since public housing was spread throughout various neighborhoods and local suburbs the CHAPD was endowed with a broader jurisdiction.

Previously the federal government paid the City of Chicago $13 million dollars a year for extra patrols to provide adequate protection for the residents of the CHA. The city posted CPD units within the building at 365 W. Oak Street for Public Housing North and 4848 S. State Street for Public Housing South almost twenty years prior to the coming of housing’s own police. CHAPD’s first station was located at 4947 S. Federal Street in CPD’s 2nd District, which was also known as the "Duece."

There was a long line of leaders who served as chief from the department's beginnings in March 1989 until October 1999, as the Department grew and learned. Gary Gunther was named as CHAPD’s first Chief of Police and was a retiree from the Illinois State Police. He was quickly followed by Madren Anderson, who was a District Commander for CPD's 2nd District, and Ira Harris. Both Gunther's and Anderson's reigns ended before the first class of police hit the street. Harris served as chief until October 1991 and it was on his watch that CHAPD lost their only officer in the line of duty.

Harris was succeeded by Hosea (Hosey) Crossley, who served from October 1991 to February 1994. Crossley, former Commander of the Chicago Police Department’s PHS unit brought with him over twenty years of police experience and knowledge of the problems CPD faced in patrolling the housings environment. Although Hosey was respected and favored by his subordinates, he was in constant conflict with the Local Advisory Council (LAC) over officer safety issues.

Joe P. Mayo, Commander of CPD’s Youth Division served as Interim Chief from February 1994 to April 1994 and Commander of Administration under Chief George Murray. Murray, a former Illinois State Patrol Officer was chief from April 1994 to November 1996. Murray established the Internal Investigations Unit and Youth Division within the CHAPD with Mayo’s help.

CPD Patrolman, Gang Crimes and PHS Tactical Team member Matthew Brandon also served as Deputy and Interim Chief from November to December 1996. Brandon had previously worked with many of the personnel he would later lead as chief and added to the CHAPD's aggressive edge in its war on gang violence.

December 1, 1996, LeRoy O’Shield left his post as Commander of CPD’s Austin District to become the eighth Chief of Police for the CHAPD. O’Shield’s thirty years of experience, support for esteemed building programs for youth and community oriented policing background led many to believe that he would be instrumental in improving relations with the residents and serve as the bridge for better co-operation between the CHAPD and CPD. That was not the case.

LeRoy O’Shield and Harvey (the beginning of the end) Radney were the last two to be appointed as Chief under the direction of the Mayor and control of CHA by the City of Chicago. Where the previous chiefs used their skills and experience to enhance the growth of the CHAPD, O’Shield and Radney were key to the dismantling and eventual demise of the entire department.

Chicago Housing Authority Police Department was divided into Operations Services, Administrative Services, Investigative Services and the C.O.P.S. Team. There were five police districts, (Robert Taylor, ABLA, Ida B. Wells, Altgeld Gardens and Cabrini–Green), each led by a Commander who oversaw their own stations. Commanders reported to the Deputy Chief, who reported to the Chief of Police who in turn was subject to the authority of the Chairman of Public Housing before the Mayor and the City of Chicago regained control in the later years.

All CHAPD units coordinated their efforts of patrol within the following CPD detective areas: Area 1 (Wentworth) and Area 2 (Calumet) covers the south and southwest sides, while Area 3 (Belmont), Area 4 (Harrison) and Area 5 (Grand Central) covers the north, west and northwest sides of the city.

Although the CPD is often credited for advancing community policing through the Chicago Alternative Policing Strategy, or (CAPS) program, it was the Chicago Housing Authority Police Department who pioneered the advance of these techniques in the City of Chicago through their Community Oriented Policing Strategy, or (COPS) program, in public housing years before it was implemented by Chicago Police Superintendent Matt L. Rodriguez. The COPS Team was created as a special unit to establish a rapport with the residents of public housing that the regularly assigned mobile and foot patrols units that answered calls for service could not.

Because of the design of the buildings, clusters of row houses, three story dwellings, or varying high-rise structures, CHAPD’s COPS team members were encouraged to engage this densely populated community on a daily basis. It was the mandate of the COPS Team to instill a constant sense of security in the residents that would not end when patrol units left the area.

The COPS Team was involved in sporting programs and after school events with local youth and worked to build relationships unrelated to arrest and detainment. Bicycles and All Terrain Vehicles (ATV) were also utilized to place officers in close contact. The presence and accessibility of the COPS Team allowed discourse between the community leaders, the Local Advisory Council (LAC), and better initiatives to deter crimes.

The COPS Team regularly attended the CPD Beat Community Meetings to allow community members to become familiar and more comfortable with the officers in an attempt to make the police more approachable when they need to ask for help.

The average citizen within the boundaries of Cook County and the City of Chicago was confused about the legitimacy of the CHAPD and questioned whether they were "the real police".[citation needed] Since the CHA had employed the use of contract security firms since the 1960s and created its own security force at the same time that the CHAPD was formed, the general public assumed that the new department and its members were also security and did not possess the power of arrest. The local media added to the public being misled by referring to the new patrolmen as a "security force" or "...presence", but never as "police officers".

The CHAPD started out with one police station located in the Robert Taylor Homes. Their first class of 86 males and 5 females was trained and graduated from the Timothy J. O’Connor Chicago Police Academy as state certified Police Officers. The first and second class of police recruits for the CHAPD followed the same curriculum as recruits for the CPD, but with a twist.

Because public housing was considered a battleground instead of an average beat, academy instructors would often express to the CHAPD recruits that their work environment would expose them to more extreme situations that the average CPD officer would encounter in the first five years on the job, so the physical fitness and combat training was intensified to give the first class a necessary edge for their efficiency and daily survival.

Suburban departments' standards for the training of their personnel differed in scope and duration. The remaining three classes of recruits for CHA followed a condensed version of the original CHAPD and CPD recruits.

The fledgling department experienced logistical and equipment difficulties that occasionally manifested itself in the form of two individuals sharing a radio during a tour of duty, or forced foot patrol for lack of vehicles. Both of these shortcomings were but a few of the problems the new officers faced, but were significant because they placed them in greater peril.

Without the proper communication, or transportation for themselves and prisoners, the officers may not have been able to arrive, escape, or call for help at a key moment. The first group compensated for the technological shortcoming with teamwork and professionalism. They realized that they were entrusted to do a job that the city's vast and famous police department had been incapable and fearful of, along with successfully paving the way for future hirees.[citation needed]

Starting salary for CHA police officers was $29,104[when?] and increased to $49,723 over the next eight years, which made them the highest-paid patrolmen in the City of Chicago until the Department's demise in 1999. The average patrolman's salary was $3,000 more a year than CPD's officers. Although it caused animosity between the two departments, the higher salary received by CHAPD officers proved to be a valuable tool when the Fraternal Order of Police union bargained for higher salaries for the CPD with the city. Currently, a starting salary for the CPD is $43,104, increasing to $55,723 after one year and an additional increase to $58,896 after 18 months.