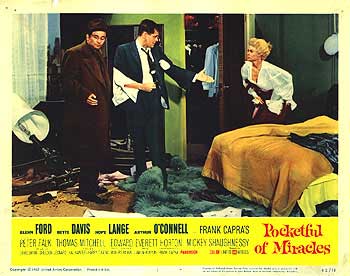 "Pocketful of Miracles" is a 1961 film that was the last to be directed by . The was based on a story by called "Madame La Gimp" and an earlier screenplay by Capra and for Capra's "" (1933). It starred , , and . The supporting cast including , and in her film debut. The film proved to be director Capra's final production, and the last role of veteran actor Thomas Mitchell.

Dave "the Dude" (), a successful, but very superstitious gangster, buys apples from street peddler Apple Annie () to bring him luck. On the eve of a very important meeting however, he finds Annie in tears. It turns out that she has a grownup daughter, one she sent as a child to Europe for a fancy education and to avoid the shame of her family background. Now, Louise () is returning to introduce her mother, whom she has been led to believe is a wealthy socialite, to her aristocratic fiancé Carlos (Peter Mann) and his father, Count Alfonso Romero ().Dave's girlfriend "Queenie" Martin () talks him into helping Annie pull off a deception. Dave acquires an instant husband for Annie, cultured pool hustler "Judge" Henry Blake (Thomas Mitchell), a butler named Hutchins (), and all the props needed to fool Annie's guests, all while postponing his appointment with another powerful gangster, much to the exasperation and nervousness of Dave's right hand man, "Joy Boy" (). When nosy reporters get a whiff that something odd is going on, they are kidnapped. Finally, Dave manages to engineer a lavish reception, with the mayor and the governor as guests. Louise and her impressed future husband and father-in-law return to Europe none the wiser.

Robert Osborne on said Capra later complained about Glenn Ford's interference with the production; among other things, Ford insisted on using Hope Lange in the film, possibly because Ford was in a long-term relationship with the actress.