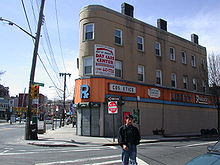 looking northwest up Victory Blvd, near Bay Street, on the North Shore

North Shore as seen from Bayonne 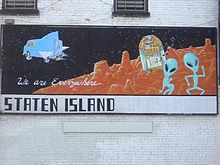 The term North Shore is frequently applied to a series of neighborhoods within New York City's borough of Staten Island, USA.

Generally, the North Shore is deemed to include the communities located within ZIP codes 10303, 10302 and 10310 in their entirety, along with all of the area covered by 10301 except Sunnyside, and those parts of 10304, 10305, 10314 that lie north of the Staten Island Expressway. This definition includes Mariners Harbor, Port Richmond, Westerleigh, Meiers Corners, Graniteville, Castleton Corners, West Brighton, New Brighton, St. George, Tompkinsville, Stapleton, Clifton, and Rosebank among the North Shore's neighborhoods. The Staten Island Expressway is considered by many to be a southern border.

The North Shore is Staten Island's oldest and most densely populated area. Archeological evidence found along its waterfront tells us that the Leni Lenape (common people) Indian Tribe established a settlement there dating back to 2100 B.C. The first white European contact with Staten Island was recorded in 1524 by Giovanni da Verrazzano. In 1609 Henry Hudson established Dutch trade in the area and named the island Staaten Eylandt after the Staten-Generaal, the Dutch parliament.

Richmond Terrace, running from the Staten Island Ferry to the Goethals Bridge is the oldest established road in Staten Island. Originally an Indian foot path, it was later developed into a road by British soldiers during the Revolutionary War. Historic buildings such as the first YMCA circa 1869; Tompkins Department Store circa 1880; The DeGroot House circa 1810; the Captain Nevielle House circa 1750; and the Greek Revival buildings at Sailor's Snug Harbor still stand along the street today.

Many historic events took place along the waterfront. New York Governor Thomas Dongan established his manor house along Richmond Terrace in 1661 in the area now known as Castleton. Frederick Douglass spoke at the Fountain Hotel; Anna Leonowens of "The King and I" fame, owned a school at the corner of Richmond Terrace and Tompkins Court; Cornelius "Commodore" Vanderbilt, railway tycoon and patriarch of the Vanderbilt family, was born in the area in 1797. In 1836, former Vice President Aaron Burr died in Port Richmond at the St. James Hotel, a prominent hotel which once stood on Richmond Terrace until it was demolished.

The North Shore is the most economically and ethnically diverse section of Staten Island. It offers single family homes as well as multi-family dwellings and it is best served by public transportation in that the Staten Island Rapid Transit and all local buses culminate at the ferry terminal.

The North Shore is home to Staten Island Yankees Stadium as well as the The New York Chinese Scholar's Garden.

According to the most current U.S. Census data estimates, the population in the neighborhoods typically lumped together as the North Shore is almost evenly split among Whites(mostly Irish and Italians), African-Americans and Hispanics, which each group comprising slightly more than 30 per cent of the total. They are joined by recent immigrants from such countries as Sri Lanka, Albania, Trinidad, Liberia and the Philippines. Since the late 1990s, the North Shore has seen a large influx of Mexican immigration, many from Michoacán, and centered around Port Richmond and Tompkinsville.[2][3] 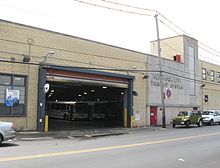 In the early and middle 20th century the North Shore was an important manufacturing district. [4]

The former HomePort site which is being developed by Iron State, will be home to shops, restaurants and entertainment facilities, providing employment opportunities for local residents.

The St. George Theater located at the top of Hyatt Street near Staten Island Borough Hall is the oldest theater in Staten Island. It has been recently restored and offers weekly live performances providing additional job opportunities for the area.

As in other densely populated areas of New York City, the north shore struggles with crime, poverty, homelessness and unemployment. [5] The district is also home to a disproportionate amount of the Island's medically uninsured, a number high enough to rank in the top third of New York City's 51 districts.[6]