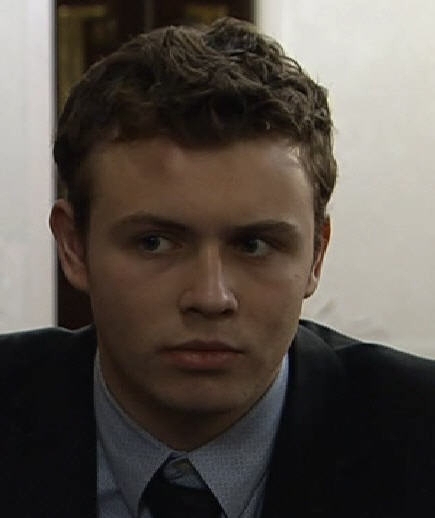 Clayton is the son of and . He was born off-screen in 1986 after the Clayton family had left Coronation Street. They decided to leave when they discovered Terry wanted to support Andrea, she didn't want to be a member of the Duckworth family and decided she would go to university while her mother Connie would raise the child. When Vera insisted on playing a part in its upbringing they packed up and left overnight.

Paul made his first appearance in the programme in November 2000 when Andrea returned looking for Terry when Paul fell ill and needed a kidney donor, Terry insisted on being the donor but got scared and left days before the operation. Vera then decided to see if she would be a suitable donor and when she was went ahead and donated her own. The aftermath of the operation was heavily featured in the live episode filmed to celebrate 40 years of "Coronation Street". Paul returned with Andrea briefly in November 2001 fully recovered to visit Jack and Vera.

Paul returned permanently to live in Weatherfield in July 2007 and started work at Leanne Battersby's restaurant, Valandro's. He later revealed that he returned to to escape his ex-employer after being caught in bed with his wife. He has since bought a share of Valandro's by taking out a loan in Jack's name.

Soon after moving into Jack and Vera's, Tyrone began to get suspicious of him. Tyrone tried several times to catch scheming Paul out, but was unsuccessful. In September 2007, Paul took some money from Jack's tin to buy items for the restaurant. He did not tell anybody about this. Jack and Vera found out and were confused, with Tyrone blaming Paul again for the 'theft'. While everybody was at the pub, Paul sneaked back and put the money back into the tin. Tyrone went back to the house alone to check the tin, and was caught by Jack, who blamed him for the theft. In October 2007, Paul's previous employer and his friend/bodyguard turned up at Valandro's and threatened Leanne to tell them where Paul lived, telling her that he had stolen £500 from them and slept with his old boss's wife. Leanne told them Paul's address, and, as the two knocked on the door, Paul begged Tyrone to help him out. Tyrone let Paul escape out the back door, and managed to get rid of the two men at the door. However, the two then went back to Valandro's and took money, champagne and expensive kitchen equipment from Leanne to compensate.

At the end of October, he made a move on his business partner , and admitted he had fallen for her, but nothing happened after that instance.

In December 2007 Paul came clean to his grandfather, Jack, about his deception in obtaining the money needed to fund his share in Valandros. This left Jack in a difficult position, given he and Vera were planning to use their savings to fund their new home in Blackpool. Rather than tell Vera the truth about the loss of money, Jack reluctantly saved Paul from being disowned by telling Vera he had miscalculated their savings.

Shortly after Vera died, Dan Mason revealed to Jack that he had a winning betting slip worth £3000, but needed it before he could hand over the cash. Tyrone, who had placed the bet for Jack, revealed he had given it to Vera to pass it onto Jack but she forgot to, prior to her death.

Molly, Tyrone, Jack and Paul searched for almost two weeks, until 18 February when Paul found the slip. When he attempted to cash it in for himself, Dan Mason confronted him and handed him £2000. Dan eventually gave Jack £3000 of his own money at the request of his father Harry.

Dan continually pushed Paul into paying back the debt. He began going to Paul and Leanne's restaurant and walking out without paying for the food and alcohol that he had consumed.

2008, Dan confronted Paul and demanded that the money be paid back by that following Friday. As the day came, Paul tried to avoid Dan until he kidnapped him into the betting shop declaring it closed. Dan asked him for the money and Paul replied that he had nothing except the clothes on his back. Dan demanded that Paul strip to his boxer shorts. At first Paul took off only his shirt, but Dan demanded his shoes and socks and his pants. Dan kicked him out and then watched the shocked Paul creep home and try not to be seen.

He wandered the street and then the back alley - luckily the only person that had seen him on the street had been Dan and a mortified passer-by. After a couple of close shaves, Paul went into the Duckworths' back garden, only to be greeted by his grandfather, Tyrone Dobbs and Tyrone's girlfriend, Molly Compton. Jack was shocked, and the young couple mocked Paul. Jack offered to repay the debt.

On 8 February 2008 it was revealed that Paul would leave Coronation Street when an insurance scam at Valandro's burns the building down. [http://www.thesun.co.uk/sol/homepage/showbiz/tv/soaps/article777125.ece]

On 31 March, Paul put his plan into action, led by Leanne in return for sexual favours, successfully set fire to the restaurant, but found out that Leanne had been using him. The next day he told a shocked Leanne that he was head-over-heels in love with her. In an act of revenge he went to the police and confessed to arson and told them of Dan and Leanne's involvement. However, the lovers were one step ahead of him as they provided an alibi for one another on the night of the fire. Paul soon realised that he alone was facing a prison sentence.

In May 2008, Paul was told by his solicitor that he would face a minimum of two years behind bars. Despairing, he confessed and made Molly promise not to tell Jack, and told her that he was considering fleeing the country, whereas he booked a stay somewhere. On May 25, 2008 Molly then told Jack and Tyrone what he had said and Jack tried to dissuade him from doing it by offering him £10,000 (from the sale of the house) to stay and face his punishment. He even promised to treble the amount upon his release from prison to enable him to start a new life. Jack then went to the Rovers to let him think over the offer. Paul soon decided to leave instead, before going out the front door he left the envelope containing Jack's money in the hallway in an effort to repent for his misdemeanors. He then asked to bring him to the airport in a taxi. Jack returned to the house to find that the money was still there and that his grandson had left.