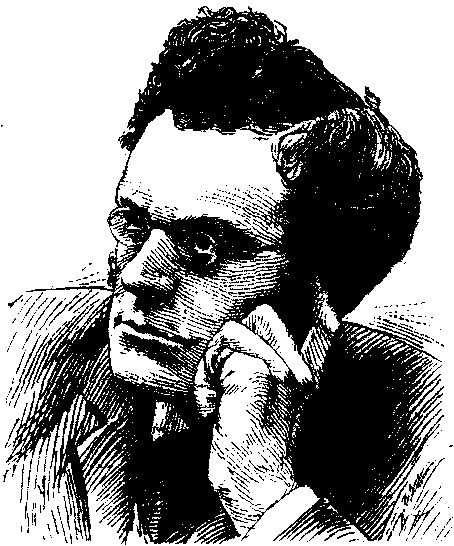 Augustine Birrell, KC (, - , ), was an English politician, barrister, academic and author. He was from 1907 to 1916, resigning in the immediate aftermath of the .

His first wife, Margaret Mirrielees, died in 1879, only a year after their marriage, and in 1888 he married Eleanor Tennyson, daughter of the poet and widow of Lionel Tennyson, son of the poet . [Ó Broin, "The Chief Secretary", p. 136] They had two sons, one of whom, Frankie (1889–1935) was later a journalist and critic and associated with the . Birrell found success as a writer with the publication of a volume of s entitled "Obiter Dicta" in 1884. This was followed by a second series of "Obiter Dicta" in 1887 and "Res Judicatae" in 1892. These, despite their titles, were not concerned with law, but he also wrote books on and on trusts. Birrell wrote, and spoke, with a characteristic humour which became known as "birrelling". [Ó Broin, "The Chief Secretary", p. 206]

After unsuccessfully contesting parliamentary seats in Liverpool, Walton in 1885 and Widnes in 1886, Birrell was elected to parliament for West Fife at a by-election in 1889, as a Liberal [Jackson, op cit p.43] . He retained his seat in the general elections of 1892 and 1895, but in the general election of 1900 he stood in Manchester North East and was defeated. He was returned for Bristol North at the general election of 1906, in which the Liberals won a large majority, and was included in the cabinet of Sir as . [Ó Broin, "The Chief Secretary", pp. 4-5] He introduced the Education Bill 1906, intended to address nonconformist grievances arising from the . It passed the House of Commons, but the amended it to such an extent that it was effectively a different bill. The Commons rejected the amendment and the bill was dropped. [Havighurst, Alfred F., "Britain in Transition: The Twentieth Century", University of Chicago Press, 1985, pp. 89-90: see [http://books.google.ie/books?id=0Nhq1g1WYmEC&pg=PA89&lpg=PA89&dq=%22education+bill%22+%22britain+in+transition%22&source=web&ots=M0e56vKiC3&sig=2sn5qtD-m0yudY_VokvfCziNoJw&hl=en Google Books] ] This made it impossible for Birrell to continue in his post, and in January 1907 he was appointed , to replace James Bryce who had been made Ambassador to the United States.

Birrell and the Suffragettes

Birrell was not really in favour of votes for women and like many of his political colleagues and members of the general public he strongly disapproved of the and violence the were increasingly espousing. In November 1910 he was walking alone from the House of Commons to the when he was set upon by a group of about twenty suffragettes who had recognised him. While he did not believe there was any serious attempt to damage him, he did suffer some injuries which stopped him from taking strong exercise on which he told he depended for his good health. He feared he might require an operation to remove his knee-cap and joked to Scott that, if he did, he would remain 'a weak-kneed politician' to the end of his life [Trevor Wison (ed.)"The Political Diaries of C P Scott: 1911-1928;"Collins, 1970 p.35]

Birrell's Under-Secretary was Sir , who had worked successfully with a previous Chief Secretary, , on the Land Purchase Act 1903. MacDonnell's proposals for what was called "" – the transfer of local powers to Ireland under a central authority – had encountered strong opposion from Unionists, leading eventually to Wyndham's resignation. Birrell modified MacDonnell's proposal and on introduced the Irish Council Bill. The bill was welcomed by Nationalist leaders and , and opposed, for different reasons, by unionists and by more radical nationalists who wanted nothing less than for Ireland. At a convention of the , opposition was so strong that Redmond changed his position; the convention rejected the bill and the government was unable to proceed with it. [Ó Broin, "The Chief Secretary", pp. 11-15] Birrell suffered further embarrassment when he sought to discontinue the use of the Irish Crimes Act 1887, a coercive measure introduced by to deal with agrarian crime, only to be faced with an increase in cattle-driving. [Ó Broin, "The Chief Secretary", pp. 18-19] Another affair, in which Birrell was not directly involved but for which he had to take part of the blame, was the theft of the from (where the Chief Secretary had his offices) in July 1907. [Ó Broin, "The Chief Secretary", pp. 25-26]

Birrell had more success with his next two bills: his excellent relations with both Catholic and Protestant Church leaders ensured the successful passage of the Irish Universities Bill 1908, which established the and and dissolved the . It solved the sectarian problem in higher education by dividing the Protestant and Catholic traditions into their own separate spheres and ensured Catholic, Nationalist scholars had access to university education [Jackson, op cit p.43] . Contemporaries also praised his achievement in carrying the Irish Land Act 1909, which allowed for compulsory purchase of large areas of land for the relief of congestion, through a hostile House of Lords. [Ó Broin, "The Chief Secretary", pp. 20-24] .

After the passing, with the support of the , of the , which restricted the power of the Lords to veto bills, Prime Minister introduced the Third Home Rule Bill on . The Unionists, led in Ireland by and in Britain by Tory leader , threatened to use force to oppose the bill, [Ó Broin, "The Chief Secretary", pp. 57-58] and Carson proposed an amendment excluding from the scope of the bill. Birrell was opposed to the exclusion of any part of the country and when proposed a compromise involving the exclusion of six of the nine counties of Ulster for a period of five to six years Birrell responded by offering his resignation. [Ó Broin, "The Chief Secretary", p. 85] The proposal was rejected by both Unionists and Nationalists and Birrell stayed on. The crisis continued through 1913 and into 1914. The bill was introduced for a third time in July 1914, this time along with an amending bill allowing for the exclusion of some of the Ulster counties, [Ó Broin, "The Chief Secretary", p. 106] but with the outbreak of the bill was passed without further debate, with its implementation suspended until after the war.

A further threat to Birrell's administration had arisen with the formation in November 1913 of the , ostensibly to safeguard Home rule but in fact, under the influence of the (IRB) aiming to break the union with Britain altogether. Feelings in nationalist Ireland were further aroused by the possibility of conscription. Sir , Birrell's Under-Secretary since October 1914, told him in September 1915 that the Nationalist Party was losing ground in the country and that extreme nationalists, often referred to as "Sinn Féiners", were gaining support. Nathan took measures such as suppressing newspapers and forcing Irish Volunteer organisers to leave the country. The Irish Party leaders, Redmond and Dillon, cautioned against taking direct action against the 'Sinn Féiners' and the administration kept to that policy. [Ó Broin, "The Chief Secretary", p. 149] Birrell himself felt that the danger of a bomb outrage was greater than that of an insurrection. [Ó Broin, "The Chief Secretary", p. 166] His assessment was proved wrong when the began on .

Birrell had spent Easter in London, where Nathan had telegraphed him with news of the capture and scuttling of the arms ship the "Aud" and the arrest of Sir . He had just sent approval for the arrest of the movement's leaders on Easter Monday morning when he was told by Lord French, Commander-in-Chief of the British Home Forces, that the Rising was on. [Ó Broin, "The Chief Secretary", p. 173] He maintained contact with Nathan by telegraph and answered questions in Parliament on Tuesday and Wednesday, then travelled by destroyer to Dublin, arriving in the early hours of Thursday morning. From there he wrote to the Prime Minister, giving him his assessment of the situation. [Ó Broin, "The Chief Secretary", p. 174] In one of his letters he wrote that he 'couldn't go on'. On , the day after the Rising, Asquith accepted his resignation 'with infinite regret'. [Ó Broin, Leon, "Dublin Castle & the 1916 Rising", Sidgwick & Jackson, 1970, p. 116] The on the 1916 Rebellion (the Hardinge commission) was critical of Birrell and Nathan, in particular their failure to take action against the rebels in the weeks and months before the Rising. [Ó Broin, Leon, "Dublin Castle & the 1916 Rising", p. 161]

While Birrell's first phase as Chief Secretary was a clear success, the period from about 1912 onwards saw something of a decline in Birrell's career which was also mirrored in his domestic life. Birrell's wife Eleanor had been suffering from an inoperable brain tumour and this eventually caused her to lose her sanity. This affected Birrell deeply privately and publicly, but he did not tell his political colleagues.

The quality of his public work deteriorated and as one historian has noted the severe personal strain must have been a contributory factor in "...the uncharacteristic combination of excessive zeal and indecision which marked [Birrell's] response to the Dublin industrial agitation of 1913" [Pat Jalland, "Augustine Birrell" in "Dictionary of National Biography", OUP 2004-08] . Only after Eleanor died in 1915 did Birrell begin to regain some of his old energy and effectiveness as a minister.

Birrell did not defend his seat in the 1918 general election, nor did he ever return to Ireland. In 1929 he accepted an honorary doctorate from the National University of Ireland, but storms in the Irish Sea prevented him from making the crossing and he had to receive his degree in absentia. [Irish Times 9 August 2008] He returned to literature with a further volume of essays and book reviews, "More Obiter Dicta" (1920) and a book on his father-in-law, Frederick Locker-Lampson. He died in on , , aged eighty-four. His autobiography, "Things Past Redress" was published posthumously.