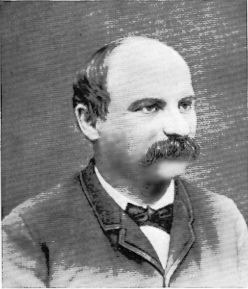 Edward Rosewater, born Edward Rosenwasser, [Bristow, D. (1997) "A Dirty, Wicked Town: Tales of 19th Century Omaha." Caxton Press. p 93.] (, – , ) was a Republican Party and newspaper editor in . Rosewater had a reputation for always being "aggressive and controversial", and was influential in Nebraska politics as one of the leaders of the state Republican Party. [(2001) [http://www.nebraskahistory.org/publish/publicat/timeline/rosewater_edward.htm Rosewater, Edward.] Nebraska State Historical Society. Retrieved 6/22/07.]

Born in Bukovany, , to a family, Rosewater immigrated to the United States in 1854.

Rosewater attended a , and then entered the with . He worked in in 1859 during the celebrated "", the Wellington rescue case. During that time Rosewater became closely associated with and , leading Rosewater to immediately sign up for Union forces at the outbreak of the . In the spring of 1862 he started serving with the United States Telegraph Corps, staying with General throughout his campaign. [(1888) " [http://www.rootsweb.com/~neresour/OLLibrary/Omaha_book/omaha043.htm Omaha Illustrated: A history of the pioneer period and the Omaha of today.] " Omaha: D.C. Dunbar & Co. Retrieved 6/24/07.]

Later Rosewater was attached to the staff of General John Pope, remaining with him until after the . Afterwards he was stationed in Washington. While serving at the telegraph office, Rosewater was responsible for sending out President 's "" on January 1, 1863. [Bristow, D. (1999) [http://members.aol.com/dlbristow/editfite.htm "Hard-Hitting Journalism."] "A Dirty Wicked Town: Tales of 19th Century Omaha."]

In the summer of 1863 when Rosewater came to , it was the terminus of the . He was the manager and an agent, and soon became the Omaha correspondent for several eastern daily newspapers. Rosewater married Leah Colman on November 13, 1864 in , departing after the wedding for where he had secured a home for his new bride.

In the fall of 1870 Rosewater was elected to the , and the following year founded the "". [(nd) [http://www.americanjewisharchives.org/aja/FindingAids/Rosewater.htm "Rosewater Family Papers".] American Jewish Archives. Retrieved 6/24/07.] While in the Legislature, Rosewater was credited with creating the first . He was historically regarded as the father of . [ [http://www.historicomaha.com/ofcchap5.htm "Chapter 5"] "Omaha's First Century". Special supplement to the "Omaha World-Herald." Retrieved 9/3/07.]

Under his guidance the "Omaha Bee" supported progressive ideas such as creation of a for the and direct election of senators. But at the same time, Rosewater opposed . A period review of his writing style commented that he wrote "concise, pointed, and clear, and in political campaigns, especially, he is an untiring and dauntless fighter." [(1888) [http://www.rootsweb.com/~neresour/OLLibrary/Omaha_book/omaha043.htm ] "Omaha Illustrated: A history of the pioneer period and the Omaha of today." Omaha: D.C. Dunbar & Co. Retrieved 6/24/07.] [(nd) [http://www.unl.edu/nebnews/nnp_bios.html Nebraska Newspapers: Early Nebraska Journalists] . University of Nebraska Libraries. Retrieved 6/24/07.]

Rosewater served on the in the late 19th century. In 1888 he built the , a downtown landmark which was demolished in 1966. He was an organizer for the 1898 , and was credited with much of the success of that event. [(nd) [http://www.nebpress.com/700/rosewater.php Edward Rosewater.] Nebraska Press Association. Retrieved 6/24/07.] and ran two losing campaigns for a seat in Nebraska. He passed away at the "Omaha Bee" building on August 30, 1906. [(nd) [http://www.americanjewisharchives.org/aja/FindingAids/Rosewater.htm "Rosewater Family Papers".] American Jewish Archives. Retrieved 6/24/07.]

Rosewater constantly pursued his own version of news, and often got into violent confrontations, with one even being given front page treatment in the "", a sensationalist New York City journal. In another fight Rosewater was almost killed by a local worker after reporting on that man's secret love affair. [Bristow, D. (1999) [http://members.aol.com/dlbristow/editfite.htm "Hard-Hitting Journalism."] "A Dirty Wicked Town: Tales of 19th Century Omaha."] Rosewater's style and treatment of the news left him open to constant criticism and attacks of his journalism, however, they also lent to personal attacks, more than one of which were in their nature. [Pollack, N. (1962) "The Myth of Populist Anti-Semitism." "The American Historical Review. 68"(1) October, pp. 77.]

Immediately before his death, Rosewater was involved in founding the . After he died suddenly of natural causes, his son joined the AJC in his place. [(nd) [http://www.ajcarchives.org/main.php?GroupingId=1870 "American Jewish History and Jewish Culture."] American Jewish Committee Archives. Retrieved 6/24/07.] In 1957 and the AJC produced a dramatic television show highlighting Rosewater's arrival in Omaha, his anti-slavery attitude and his journalistic style. [(1957) [http://www.ajcarchives.org/main.php?DocumentId=11660 "Ready Mr. Rosewater?"] Produced by CBS and AJC.]