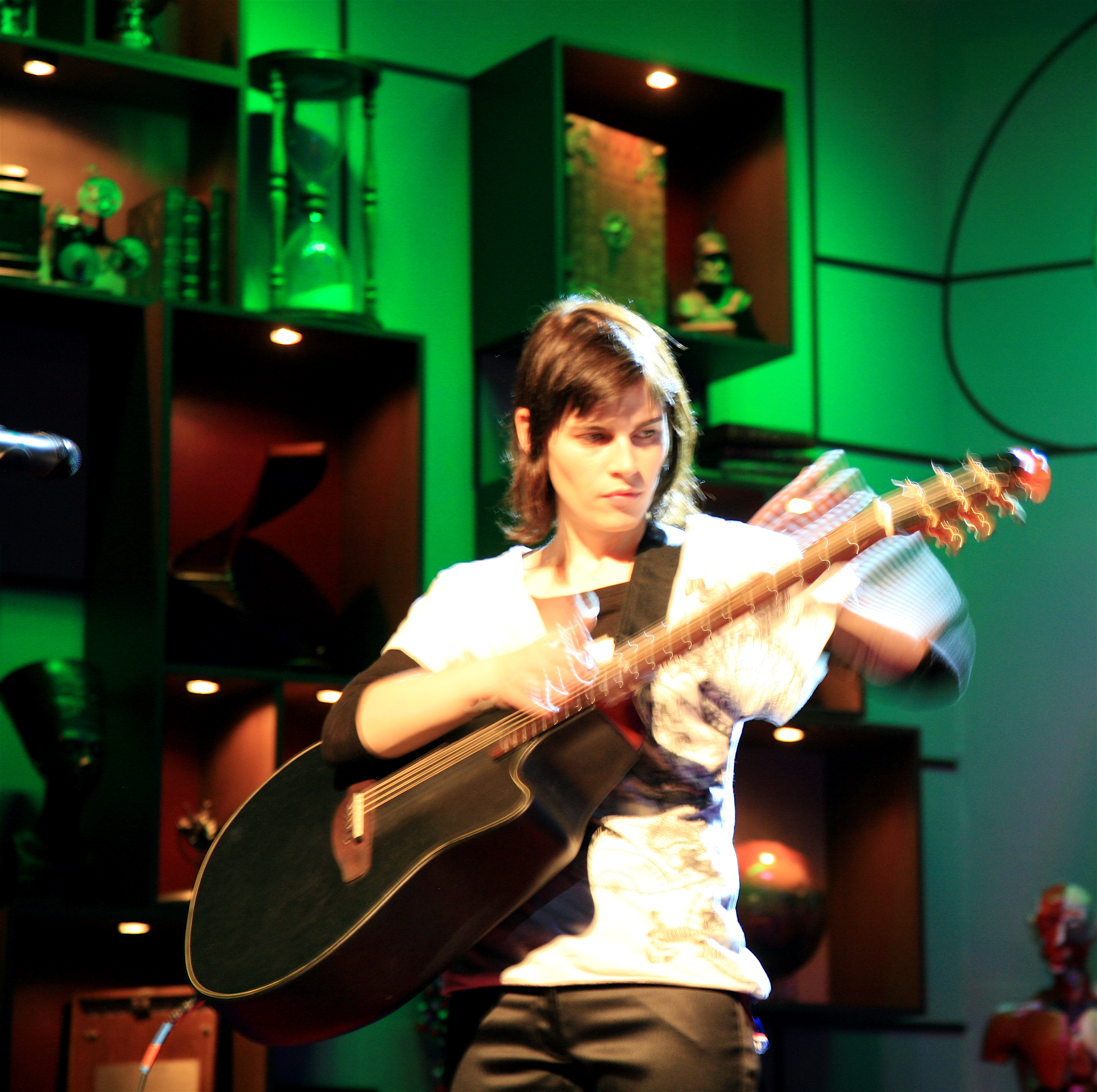 Kaki King (born , as Katherine Elizabeth King) is an American player and singer-songwriter from , Georgia.

As a child, her father encouraged her to be involved in music, and although she was first introduced to the guitar at a young age, the drums were her first serious instrument. King played in bands in high school with classmate Morgan Jahnig, upright bassist of . Upon graduating from in Atlanta in 1998, the two friends made their way to . During her time there, King adopted the guitar again after years of neglect, and the 5'1" musician played a few occasional gigs, and busked in the New York subways. [ [http://www.wnyc.org/shows/soundcheck/episodes/2007/04/18 New York Public Radio interview, April 18, 2007 (access to video)] ] [cite news | first=Rob | last=Trucks | coauthors= | title=Kaki King's Busker Therapy | date=2008-03-18 | publisher= | url =http://www.villagevoice.com/music/0812,kaki-king-s-busker-therapy,381256,22.html | work =The Village Voice | pages = | accessdate = 2008-03-25 | language = ]

King's two earlier recordings "" (with ) in 2003 and "" (with ) in 2004 featured more acoustic compositions, but her 2005 tours saw more use of electric guitars and loops. During some shows, she made it known that she had parted ways with major label Sony. For her third album "", King made a conscious decision to depart from her previous musical direction, [ [http://www.sfgate.com/cgi-bin/article.cgi?file=/gate/archive/2006/09/21/derk.DTL "Kaki King, the princess of acoustic fingerstyle guitar, heads off in a new direction", by Derk Richardson, September 21, 2006] ] out of a desire to escape being pigeonholed as a solo instrumental artist. The album features King's vocals on more tracks than previous albums. With the prominence of electric guitar on the new record and the addition of a full band, the popular music website called the sound a “post-rock makeover”. Featuring production work by Tortoise's , the album was released on , on Velour Records.

King's official Italian webpage is hosted by Mechanism Records, who also redistributed her debut "Everybody Loves You" in Italy with some bonus tracks and different album artwork. [ [http://www.kakiking.it/ Italian Kaki King website] ]

In a bulletin on , , King announced that she would play with a full band for the first time on her upcoming tour.

In 2007, she was featured as a guest guitarist on "The Con", an album by Canadian indie-pop/rock band , released on , . She appears on the tracks “Knife Going In”, playing , and on “Floorplan”, playing guitars (Both songs were written by Sara Quin).

King has also appeared as a guest guitarist on the track “Ballad of the Beaconsfield Miners” from the ' studio album, entitled "", released on , . On , she joined Grohl on stage to perform the track at the O2 arena in London. With fellow musicians like and in attendance, Grohl is quoted as saying: “There are some guitar players that are good and there are some guitar players that are really fucking good. And then there's Kaki King.” [ [http://www.nme.com/news/foo-fighters/32589 "Foo Fighters team up with Kaki King in London", NME magazine, November 18, 2007] ]

On , , she appeared at a "Breakfast with the Foo Fighters" hosted by from , a commercial radio station located in . There she performed “Ballad of the Beaconsfield Miners”. Grohl jokingly stated that he is "...molding her to take his place." She is touring with the Foo Fighters on the Australian leg of the Echoes, Silence, Patience and Grace tour.

King also appears in the 2007 film, "", performing as the main character's hands and playing his guitar parts. In addition, she contributed to the music for the 2007 film, " Into the Wild", produced and directed by , playing “Frame” and “Doing the Wrong Thing”. Both songs are featured on her second album, "Legs to Make Us Longer".

On March 4, 2008, iTunes released a full version of 'Dreaming of Revenge' featuring the bonus track "I Need A Girl Who Knows A Map.'

King is a featured artist for Adamas and Ovation guitars. Adamas guitars' composite tops are well suited for her tap-style playing, as King herself noted on the DVD "Unique Voices - 40 Years of Ovation Guitars". The soundholes on her Adamas guitar are adorned with a cloudlike pattern inlay that King designed herself.

In an interview in the April 1, 2008 issue of , King says she hopes she can be known more for her music and not just as a "good female guitarist."

“Ultimately, I’d rather be known as like, ‘Oh yeah, that sounds like Kaki King,’ rather than ‘Oh, she’s pretty good for a girl.’” [ [http://blastmagazine.com/2008/04/kaki-kings-dream-world/ Blast - Kaki King’s dream world - The Online Magazine ] ]

Is confirmed to make an appearance on the fourthcoming tribute to on Records in Fall 2008 covering "Close To Me".

Whilst touring Australia with the Foo Fighters in 2008, Kaki featured on ABC radio station 's Like A Version where she performed a cover of the second half of Justin Timberlake's song LoveStoned/I Think That She Knows. This performance was also filmed and aired on the ABC show jtv on May 5 2008.

Was featured performer in , a 30 minute solo concert filmed for television in Canada in April 2008 and premiered on October 8 2008. [ [http://www.theberkeleysessions.com "The Berkeley Sessions - official website"] ]

According to a recent article in , and other publications, she is an open lesbian.

*King has appeared in several commercials to promote the first vaccine for cervical cancer.

In February 2006, King was named as a “Guitar God” by , becoming the first ever female to make this list in the history of the publication.Fact|date=April 2008

King's style combines fret-tapping with slap bass techniques, using the guitar for percussional beats, as well as sound layering and looping, which creates a percussive and complex sound. Her playing style evokes and , [ [http://wc09.allmusic.com/cg/amg.dll?p=amg&searchlink=KAKI|KING&sql=11:gcfqxqt0ld6e~T0 Kaki King biography by Marisa Brown, All Music Guide] ] the latter of whom she explicitly cites as an influence. [ [http://www.npr.org/templates/story/story.php?storyId=4179954 Interview with Kaki King on NPR (access to audio and video)] ] Although she shares both similar playing techniques and a last name with guitarist Justin King, the two are not related.