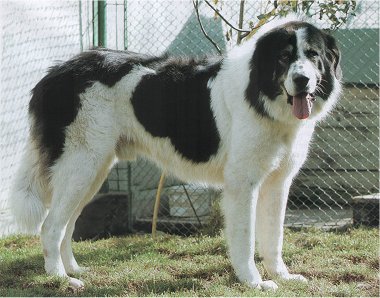 The Ciobănesc de Bucovina is a strong and rustic dog, it was for centuries the best partner and companion for the Romanian s in the . Their original use was to guard and protect the herds against predators (wild animals or thieves).Today, Bucovina Shepherd Dogs are more and more appreciated also by people living in cities, who keep them as watch dogs or just as pets, because of their balanced temperament and the kindliness they show to children. There are three types of Romanian shepherd dogs: Mioritic (old name Barac), Carpatin (old name Zăvod) and Ciobănesc de Bucovina (a name given to both types).

The Bukovina's head is massive, slightly elevated with respect to the back line. The skull is moderately wide. The stop is slightly marked. The nose is black well developed and wide. The muzzle has the shape of a truncated cone, of the same length as the skull, well developed. It becomes progressively narrow towards the extremity but it is never pointed. The lips are thick, well applied, with strong pigmentation. This breed should have strong jaws, with healthy white teeth and a scissors bite. Level bite is allowed. The cheeks are not prominent. The eyes are small in comparison with the dimensions of the skull, almond-shaped and slanting, chestnut colored or slightly lighter, never yellow. Eyelids are well pigmented. The ears are high, “V” shaped, with rounded tips, fallen, and very close to the cheeks. The neck is moderately long, bulky and strong, without dewlap. The muscular body is massive with a well supported back. The chest is wide and tall, reaching the level of the elbows with well arched ribs. When the dog is relaxed it tends to hold the tail low, reaching the point of the hock or even lower. When the dog is alert and is paying attention or is in action, the tail is elevated. In this case it may rise above the level of the back, sickle shaped. The skin is thick and dark gray. The hair is short on the head and forelegs. On the body, the hair is abundant, straight, thicker and harder, 2½- 3½ inches (6-9 cm.) long. The next layer of hair is shorter and thick, with a lighter color. On the neck, the hair is longer and forms a mane. On the backside of the legs, the hair forms fringes of moderate length. The tail is bushy, covered with longer and thicker hair. The coat background must be white with well-defined, sand-charcoal colored, black or brindled patches. On the legs, there can be little black or other color drops. Completely white or black animals are accepted but not preferred by breeders and in show rings.

The Bukovina Sheepdog dog was bred to protect sheep flocks and . They are excellent . This breed is balanced, calm, very devoted, and loves children. It does not trust strangers. An excellent watchdog for herds, dogs of this breed are courageous and very combative where potential predators are concerned. They do have a powerful bark. If strangers or animals come close to its territory, the fact is signaled by a deep penetrating bark. During the night, it patrols around the property or herds. An adult Bukovina Sheepdog needs plenty of space to run around with a large back yard.

The Bukovina Sheepdog is a native breed from the Carpathian Mountains, in in the North-East of Romania. In this region, this breed’s individuals are used with great success for guarding herds and property. This dog is also known as Dulau (shepherd’s dog) or Capau.The first standard was written in 1982 and updated in 2001 by the Asociatia Chinologica Romana (Romanian Kennel Club). The present standard, dating from March 29, 2002, was written and updated according to the model established by the 1987 FCI General Assembly from Jerusalem. [cite web
authorlink =
title =Provisional Basis Recognition
work = reconition of breed by the
publisher =
date =2005-07-13
url =http://romdogs.tripod.com/sheepdogs/docs/cir36racesprovisoires7juil05.pdf
format =PDF
accessdate = 2007-06-23 ]

The Ciobănesc de Bucovina is soon to be recognised by the FCI, where as its cousins are officially recognised already.. [cite web
authorlink =
title =Provisional Basis Recognition
work = reconition of breed by the
publisher =
date =2005-07-13
url =http://romdogs.tripod.com/sheepdogs/docs/cir36racesprovisoires7juil05.pdf
format =PDF
accessdate = 2007-06-23 ]