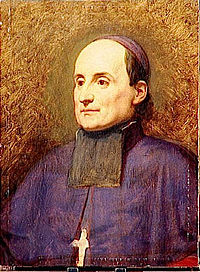 After his ordination to the priesthood at Rome in 1818, he was assigned to the Archdiocese of Paris. He was named canon of the cathedral of Nîmes in 1822, became known as a preacher, and contributed to L'Avenir. In 1837, during a vacancy, he was chosen administrator of the Diocese of Nîmes, and two years later was raised to the episcopal See of Digne.

His administration was marked by his encouragement of ecclesiastical studies, a practical desire to increase the importance of the functions exercised by his cathedral chapter, and an observance of canonical forms in ecclesiastical trials. The same principles actuated him in his rule of the Archdiocese of Paris, to which he was called largely because of his prompt adhesion to the new government after the Revolution of 1848. Sibour was part of the ministerial commission which prepared the draft project for the Falloux Laws on education, which highly increased the clergy's influence in schools.

He held in 1849 a provincial council in Paris, and in 1850 a diocesan synod. In 1853 he officiated at the marriage of Napoleon III, who had named him senator the previous year.

Although in his answer to Pope Pius IX he declared the definition of the Immaculate Conception inopportune, he was present at the promulgation of the Decree and shortly afterwards solemnly published it in his own diocese. The benevolent co-operation of the imperial government enabled him to provide for the needs of the poor churches in his diocese and to organize several new parishes. He also aimed at introducing the Roman Rite in Paris and was progressing favorably in this direction, when he was assassinated by an interdicted priest named Jean-Louis Verger, who openly admitted to the crime.

Archbishop Sibour may be the only cleric murdered in modern times due to his assassin's views on papal doctrine. Verger was an opponent of the newly created doctrine of immaculate conception as well as celibacy for the clergy. However he was a continuous troublemaker, frequently complaining of the jobs he was assigned to (most of which his temper made it impossible to succeed at). The trial became (in his mind) a sounding board for his notions. He was found guilty the day of the trial (17 January 1857) and sentenced to death. To the end Verger had convinced himself that the Emperor Napoleon III would pardon him. When he was executed at La Roquette Prison on 30 January 1857 he was in a state of panic and fear at the failure of the pardon to come.