History of the Jews in Saudi Arabia

History of the Jews in Saudi Arabia

"The history of Jews in Saudi Arabia"' refers to the in the areas that are now within the territory of . It is a history that goes back to Biblical times.

The first mention of s in the areas of modern-day dates back, by some accounts, to the time of the First Temple. Immigration to the began in earnest in the 2nd century CE, and by the 6th and 7th centuries there was a considerable Jewish population in , mostly in and around , in part because of the embrace of Judaism by such leaders as (who was very aggressive about converting his subjects to Judaism, and who persecuted in his kingdom as a reaction to Christian ) and .

The Hejazi Jews were mostly wine merchants and traders. At the same time, a considerable Jewish population was growing in nearby present-day , particularly in and , which sustained their Jewish populations until relatively recently. Jewish settlement also existed in the northern parts of the peninsula.

There were three main Jewish tribes in Medina, forming the most important Hejazi community before the rise of Islam in Arabia. These were the , the , and the .

After the rise of in the 7th century, the Jewish population of Yemen was treated in a progressively harsher fashion despite the Quranic verse "There is no compulsion in religion" (verse 2:256).

Unfortunately, this Quranic verse, or Sura, is not as permitting as one might think given the Islamic concept of Dhimmi which states that "Jews, Christians, and Sabeans" are to be treated not as Infidels but as a separate, third classification, "al Dhimmi." Dhimmi are , among other things, not allowed to vote, testify in court, use the same conveyances as Muslims although this is not always adhered to (in earlier eras it was taken to stipulate that a Jew must ride a donkey, if anything, while Muslims alone were permitted to use horses or camels), to build an edifice higher than the lowest Muslim edifice in any city boundary, and so on.

Although Jewish religion and culture survived under some Islamic civilisations, Jews suffered more and more restrictions and even indignities as time passed. Aside from their status as al Dhimmi, Jews were also stipulated to wear particular clothing denoting their specific religious faith and ethnicity. Sometimes this meant only wearing a coloured patch or special headgear aside from traditional Jewish headcovering that was adopted in much of the world in later eras. At other times, it meant stipulations that were designed to emasculate Jewish men, as in Yemen, et al where Jewish men were prohibited from wearing the customary scimitar worn by all adult male Muslims in that region of the Arabian peninsula.

Jews continued to endure these and other indignities, up to and including violence and death, but in the region now known as Saudi Arabia, Jews gradually disappeared via assimilation or the more frequent attrition. While Jewish populations seem to have increased in that region even after the Islamic Advent, by the middle of the 16th Century A.D. all Jews had disappeared from al Hejaz Region. This was unfortunately made so in the rest of Saudi Arabia by royal edict after than nation's independence.

The journey of Benjamin of Tudela

A historical journey to visit far-flung Jewish communities was undertaken by Rabbi from to that crossed and tracked some of the areas that are today in the geographic area of Saudi Arabia. One map of his travels in the areas of present-day Saudi Arabia shows that he stopped at Jewish communities living in and [cite web |publisher= Wikipedia map |title= Map . 1907: Includes map of route (p. 2) and commentary.
url=http://en.wikipedia.org/wiki/ 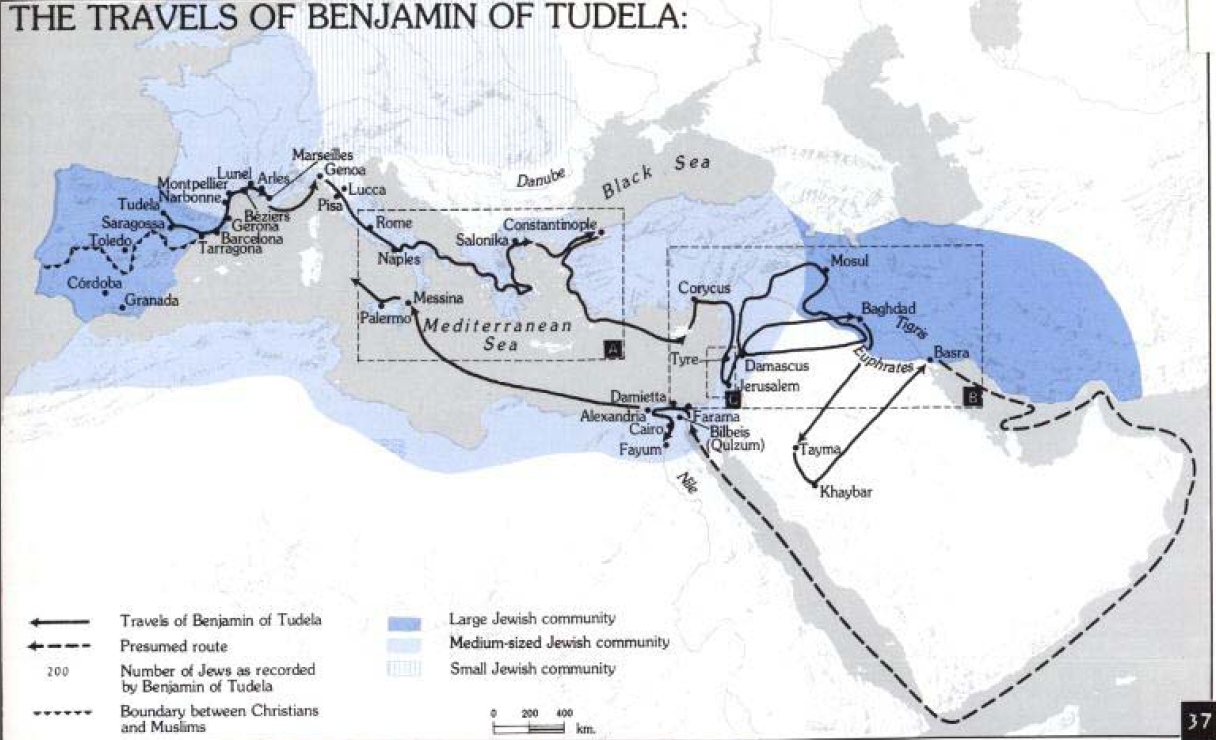 One of the known towns that Benjamin of Tudela reported as having a Jewish community was "El Katif" [cite book |publisher= Quantum Books. London, 2004 |title= "From Abraham to the Destruction of the ": "The Illustrated Atlas of Jewish Civilization", pp. 30-31 |author=Josephine Bacon. Consultant editor: ] located in the area of the modern-day city of in the northern part of the . "Al-Hofuf" also "Hofuf" or "Al-Hufuf" ( _ar. الهفوف) is the major urban center in the huge in . The city has a population of 287,841 (2004 census} and is part of a larger populated oasis area of towns and villages of around 600,000. It is located inland, southwest of and the -- metropolitan area on the road south to .

There is virtually no Jewish activity in Saudi Arabia today. Public worship of all religions but Islam is strictly forbidden.

US Secretary of State , the first Jewish person to hold that position, came to Saudi Arabia on ten official trips on diplomatic missions on behalf of the United States [cite web |publisher=U.S. Department of State |date=December 21, 2007| title= Saudi Arabia|url= http://www.state.gov/r/pa/ho/trvl/st/13105.htm] :

Jewish US personnel during the Gulf War

During the (1990-1991), when approximately a half million US military personal assembled in Saudi Arabia, and many were then stationed there, there were many Jewish US service personnel in Saudi Arabia. It is reported that the Saudi government insisted that Jewish religious services not be held on their soil but that Jewish soldiers be flown to nearby US warships. [cite web |publisher=Alpha Books |date=December 21, 2007 |title= The Complete Idiot's Guide to Understanding Saudi Arabia |url=http://books.google.com/books?id=h4dle6jcr68C&pg=PA109&ots=6HgbE3lWPh&dq=jewish+us+soldiers+in+saudi+arabia+during+gulf+war&sig=4K4hjLmkxsn7te29hqwcdi28eEc]

Jews in the Arabian Peninsula

History and travels of Benjamin of Tudela