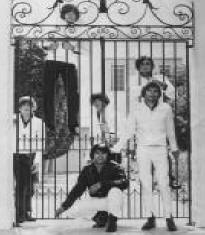 "The Human Expression" is a band from that released three well-regarded singles and made additional s between 1966 and 1967.

History of the band

The band formed in 1966, with the members coming from , and (both in Orange County) [MySpace profile of the band, profile.myspace.com] . Jim Quarles invented the name "because it had a mystical and otherworldly ring", and the father of one of the band members (Jim Foster) served as their manager. The two then began writing songs for the new band: "I didn't know what I was doing at the time. I just wrote the songs with Jim Foster. I didn't have any prior experience." [Liner notes, Love at Psychedelic Velocity, Collectables Records (also the source for the other information on the band that is not cited)]

After rehearsing for six months, they went to a recording studio and cut the s for their first single, eventually securing a recording contract with Los Angeles-based Accent Records. While the "A" side of the demo single was selected, the "B" side was replaced with a song that is probably their best known recording, "Love at Psychedelic Velocity."

Two more original compositions made up the second single; the demos and the released recordings of each side have survived. Both singles were mixed by , famed for his work with .

Perhaps due to the slow sales of the band's own songs, their manager brought demos of two songs by then-unknown songwriter to the band to consider for their third single. They selected "Sweet Child of Nothingness" as the "A" side of their third single, to be backed with another original composition as the "B" side. The other song was "," which did not impress Jim Quarles; in 1968, this would become a smash hit by Steppenwolf.

Before the band's third single was released, lead guitarist Martin Eshleman hurt his hand and had to leave the band. Although a new guitarist was brought in, Jim Quarles left almost immediately: "This move kind of destroyed the chemistry of the band. I felt it was time to move on". [Ibid.]

"Love at Psychedelic Velocity" is featured on the last of the 10 LPs issued by in the . It has an unusual structure in that, in two places, the pace of the song slows down dramatically – sounding like , according to the for Pebbles, Volume 10 – and then speeds to a breakneck pace immediately afterward. Despite the song's name, "Love at Psychedelic Velocity" is more in the style of a song than a song.

This being the 1960s, the original "B" side of their first single, "Readin' Your Will", may have been dropped due to its being a cautionary tale about a friend who is indulging too much in illicit sex and drugs. Had it remained the single's flip side, this song would have been released in the same year as "Kicks" by , which has a similar theme.

Their second single is an ethereal number called "Optical Sound", where the singer is collecting his thoughts after a drug experience. The title may refer to the that is sometimes experienced by people on an trip. This may be their best known recording, and it is included on twice as many s as "Love at Psychedelic Velocity."

As one contemporary reviewer noted: "In a different reality, they might've been a more mature and serious competitor to , perhaps even succeeding at doing what did, only without the literary pretensions or personal excesses." [Bruce Eder, All Music Guide, www.emusic.com]

Following the break-up of The Human Expression, Jim Quarles cut several s in the studio, though they were not released until collected on a 1994 retrospective album (see below). He has worked for many years as a in the music industry.

The music of The Human Expression has been compiled by / on a called "" that was released in 1994.

Other sources of the music

A , "", was released by the same label in 2000 and featured three of their songs (and virtually the same cover), plus additional recordings by several other bands. A previously unreleased song, "Your Mind Works in Reverse", is featured on the latter compilation album that is not included on "Love at Psychedelic Velocity". Whether this song is actually by The Human Expression or by Jim Quarles individually is unclear, although the unreleased songs on "Love at Psychedelic Velocity" are credited only to Quarles.

There are also many sites where songs by The Human Expression are available as downloads.

Finally, the original 45s also surface occasionally and are in great demand. In 2003, an original pressing of the "Optical Sound" single sold on for $2,300. [Auction detail item, www.popsike,com]

"Your Mind Works in Reverse":