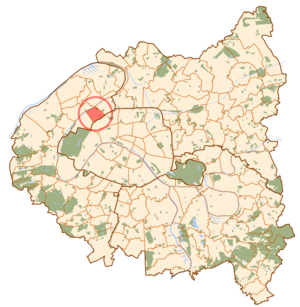 Levallois-Perret is a commune in the northwestern suburbs of , . It is located 6.4 km. (4 miles) from the center of Paris. It is one of the most densely populated municipalities in .

On the territory of what is now Levallois-Perret there existed before the the village of Villiers and the hamlet of Courcelles (aka La Planchette), which left their names to two stations. At the time of the creation of French communes during the French Revolution, these were part of the commune of Clichy, while the commune of extended over what is now the southwestern part of Levallois-Perret.

Landowner started some housing developments in 1822 in the northeast of the commune of Neuilly-sur-Seine, in a place soon called Champerret ("champ perret" meaning "field of Perret"), which gave its name to one station of the Paris Métro. Later in 1845 Nicolas-Eugène Levallois started some housing developments for landowner on his land near La Planchette (in the commune of Clichy). The land developed by Nicolas-Eugène Levallois soon became know as the Village Levallois.

In the 1860s the Village Levallois and Champerret had grown to the point of forming a single built-up area. Several demands were made to the authorities for the incorporation of the area as a commune.

Levallois-Perret became an important center of the early French automotive industry with the implantation of companies such as , or the coachbuilder Chapron. purchased the Clément-Bayard factory and the famous was produced in Levallois for nearly forty years. Levallois-Perret was also an important centre of cosmetics industry in the early 20th century. It is also home to the large European commercial real estate company .

The Northern part of famous in river where French painters created many of their master pieces, is part of the commune of Levallois-Perret.

Levallois-Perret is divided in two cantons:

It is also served by Clichy – Levallois station on the suburban rail line.

The traditional coat of arms for the city puts emphasis on the importance of in the city's history. The centre of the arms consists of a shield with red background; a yellow in the bottom left and a yellow perfume diffuser in the top right represent the mechanical and industries.

Three yellow s, are depicted on a white bend sable from the top left to bottom right of the shield, these are another symbol of work in the city, taking place at the "île de la Jatte". The coat of arms also has a wreath at the bottom around the shield and three castles topping the shield; both in yellow. VILLE DE / LEVALLOIS - PERRET, is inscribed in black letters above the coat of arms.

A cartoon stylised bee is maintained in the modern logo of the city.