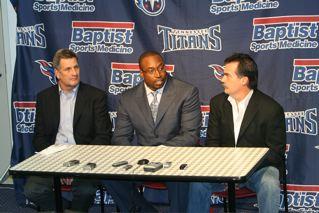 Algernon Darius "Alge" Crumpler (pronEng|al-JEE) (born , ) is an for the of the . He was originally drafted by the in the second round of the . He played at North Carolina.

Crumpler attended in and was a letterman in football and track & field. In football, he started as a tight end and as a linebacker, and as a senior, he was an All-Midwest 4-A Conference selection. In track&field, he threw the shot put and the discus, and was a three-time State Champion on the discus, and won a State Championship on the shot put in 1996. Alge Crumpler graduated from New Hanover High School in 1996.

During his last three seasons with the , he was named to the All-ACC first team. As a sophomore, Crumpler caught 24 catches for a total of 278 yards, with four of those catches being touchdowns. In his junior season, Alge had 20 catches for 191 yards. His senior season concluded with him amassing 23 catches for 287 yards and one touchdown and he finished second in All-American voting.

Crumpler was drafted by the Falcons 35th overall in the second round of the .

Crumpler made his first appearance as an NFL starter in a game against the on September 23rd, 2001. He caught his first two balls for a total of 13 yards. His first touchdown in a game was against the , on October 21st, 2001. Alge has earned 5 consecutive Pro Bowl honors (2003-2007), and has been the receiving leader for the for two straight seasons. In 2005, Crumpler set the Falcons' single-season record for catches (65) and receiving yards (877) by a tight end [ [http://atlantafalcons.com/team/playerBio.jsp?id=1503Atlanta Falcons.com] ] .

In December 2007, Crumpler was fined by the NFL for wearing black eye strips during a which had the letters MV and the number 7 written on them in support of former teammate .

On March 2, 2008 he signed with the . Crumpler made his debut on September 7, 2008 against the Jacksonville Jaguars.

Alge is named after his father's favorite book, "".