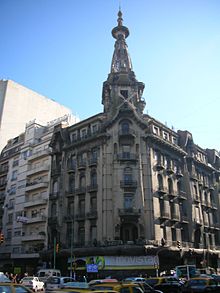 The Confitería El Molino is an Art Nouveau style coffeehouse located on the corner of Callao and Rivadavia Avenues, in front of the Argentine National Congress in Buenos Aires, Argentina.

In 1915 Cayetano Brenna, a famous confectioner, commissioned the Italian architect Francisco Gianotti, to design the building that would house the café on its ground floor. When finished in 1917 the building, which was on the site of an existing café, was one of the highest buildings in the city with a corner turret illuminated from the inside with electric lighting, and featuring stained glass windows and decorative windmill sails. El Molino and Galería Güemes were two of Gianotti's greatest works and represent important examples of Art Nouveau style architecture in Buenos Aires.

Over the years El Molino became a favourite meeting place for local cultural, business and political figures. The café was closed on February 23, 1997, however, and today is only rarely opened to the public for events designed to advertise the urgent need to restore the building, prior further disintegration.

In 1997 El Molino was declared a National Historic Monument.