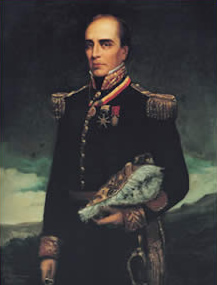 Urdaneta was born in the province of Maracaibo in to an aristocratic family of Spanish descent. Prior to the independence war he was a student of and , and an officer for the .

After the 1810 declaration of independence, Urdaneta, from , joined the patriotic ranks in the war against . A few years later, through illustrious gallantry he became Simón Bolívar's right hand and General of the Patriotic Army.

Secretary of Military and Defense, Senator of Congress on numerous occasions, Urdaneta notably took control of the government in in September of 1830, hoping, in part, of having Bolívar return as president (Bolívar had left Bogotá earlier that May for a journey to Europe and would be dead of before the end of the year). However, Urdaneta's government eventually fell to forces allied to .

Urdaneta "The Brilliant", died in Paris in 1845, due to kidney stones.