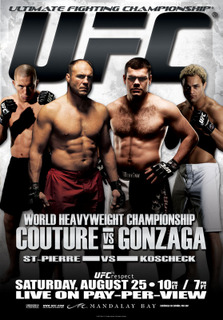 Former UFC and TKO welterweight champion , in his first fight since losing his title to at "", was matched up against "The Ultimate Fighter's" .

*Lightweight bout: flagicon|Brazil vs. flagicon|USA :Guida wins by split decision. Judges scored the bout 30-27 and 30-27 for Guida, and 29-28 for Aurelio. This preliminary bout was not aired on the broadcast.

*Middleweight bout: flagicon|Brazil vs. flagicon|USA :Leites wins by submission () at 3:47 of round one. This preliminary bout was aired on the broadcast. Leites was a late replacement for Jensen's original opponent, , who withdrew from the card due to a neck injury.

*Heavyweight bout: flagicon|USA vs. flagicon|Netherlands :Mir wins by submission (kimura) at 1:17 of round one. This preliminary bout was not aired on the broadcast.

*Light heavyweight bout: flagicon|Brazil vs. flagicon|USA David Heath:Sobral wins by submission () at 3:30 of round two. This preliminary bout was not aired on the broadcast.:Sobral was fined $25,000 by the Nevada State Athletic Commission because he did not immediately follow referee's directions for releasing his chokehold after Heath tapped. [cite web
last = Ken
first = Pishna
url = http://www.mmaweekly.com/absolutenm/templates/dailynews.asp?articleid=4767
date =
accessdate = 2007-10-30
publisher = MMAWeekly.com
title = RENATO "BABALU" SOBRAL FINED $25,000] Due to the controversial manner in which the bout was stopped, Sobral was subsequently released from his UFC contract. [cite web
last = Gross
first = Josh
url = http://www.sherdog.com/news/news.asp?n_id=8797
date =
accessdate = 2007-08-30
publisher =
title = Babaloose: UFC Cuts Controversial Fighter]

*Middleweight bout: flagicon|USA vs. flagicon|Canada :Côté wins by knockout due to punches at 4:45 of round one.

At each UFC event, $40,000 is awarded to each of the fighters who receive one of these three awards.

*Submission of the Night: flagicon|Brazil

*Knockout of the Night: flagicon|Canada