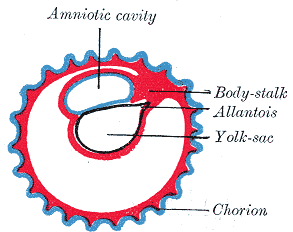 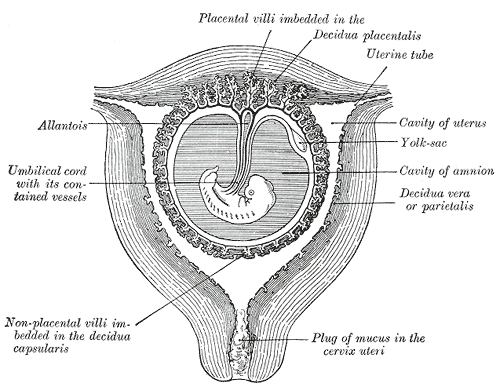 Allantois (plural "allantoides" or "allantoises") is a part of a developing animal (which consists of all nic and extra-embryonic tissues). It helps the embryo exchange gases and handle liquid waste.

The allantois, along with the and (other embryonic membranes), identify humans as s, along with s, s, s, and other s.

This sac-like structure is primarily involved in and , and is webbed with s.

The function of the allantois is to collect liquid waste from the embryo, as well as to exchange gases used by the embryo.

In reptiles, birds, and monotremes

The structure first evolved in and as a reservoir for nitrogenous waste, but also as a means for oxygenation of the embryo.

is absorbed by the allantois through the . The allantois functions similarly in , which are egg-laying .

In most , the allantois is avascular, having no blood vessels, but still serves the purpose of storing nitrogenous (N2) waste.

Also, most marsupial allantoises do not fuse with the . An exception is the allantois of the , which has a vasculature, and fuses with the chorion.

In mammals, the allantois is part of and forms an axis for the development of the .

A patent allantois can result in .

The word comes from the Greek word for , which the allantois resembles.

* [http://www.uta.edu/biology/westmoreland/classnotes/1442/Chapter_47_files/image007.gifDiagram at University of Texas - Arlington]