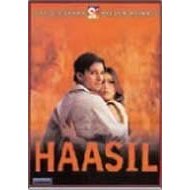 Haasil ( _hi. हासिल) is -winning 2003 film directed by . Irfan Khan won for Best actor in negative role for his portrayal of Ranvijay Singh in the movie.

Movie is set and shot in and around , .

When college student Aniruddha () meets pretty co-ed Niharika (), they quickly become romantically involved. Unfortunately, their relationship can't escape the politics involved in sex and gang life. When Aniruddha meets Ranvijay (Irfan Khan), a big man on campus prone to toting a gun, he believes he's merely helping his fellow student escape from a rival gang. It's not long into their friendship, however, that Aniruddha realizes Ranvijay is just using him as a means to get to Niharika.

In recent times, (Haasil) has gained a cult following for itself. With impeccable and memorable dialogues that were further perfectioned by the top-notch acclaimed indian actors and , Haasil is gaining popularity day by day with the help of cable T.V. movies, C.D.s and internet . It does not contains any bigger bollywood stars but the dialogues of even small time actors have been memorized by audience. There are college group and communities where students are talking in Haasil dialects.,who are caaled "Haasilmay"(हासिलमय)("may"=very much into).

The soundtrack features 7 songs composed by , with lyrics from .