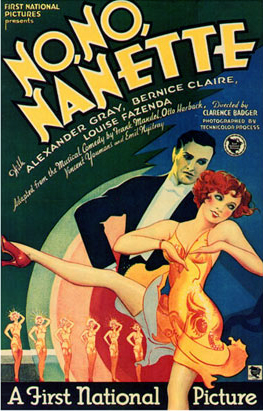 based on the play by

"No, No, Nanette" (1930) is an All-Talking musical comedy film with sequences. It was adapted from the play (with the same title) by and . "No, No, Nanette" was a popular show on Broadway, running for 321 shows, and was produced and directed by Harry Frazee.

Jim Smith (), a millionaire due to his Bible publishing business, is married to the overly frugal Sue (). They desire to teach their ward Nanette (), who has an untapped wild side, wants to have some fun in Atlantic City, and is being pursued by Tom Trainor (Alexander Gray), to be a respectable young lady. With so much unspent income at his disposal, Jim decides to become the benefactor for three beautiful women, but soon realizes his good intentions are bound to get him in trouble. He enlists his lawyer friend Bill () to help him discreetly ease the girls out of his life. Sue and Billy's wife, Lucille (), learn about the women and assume their husbands are having affairs with them. Eventually, Bill and Jim explain the situation and are forgiven by their wives. Likewise, Nanette and Tom sort out their difficulties and decide to be married.

No film elements are known to exist. The complete soundtrack survives on disks.