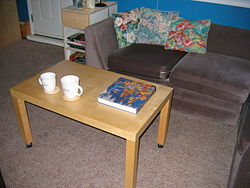 A coffee table, also called a cocktail table, is a style of long, low table which is designed to be placed in front of a sofa, to support beverages (hence the name), magazines, books (especially coffee table books), and other small items to be used while sitting, such as beverage coasters. Coffee tables are usually found in the living room or sitting room. They are available in many different variations and prices vary from style to style. Coffee tables may also incorporate cabinets for storage.

The idiom "Gather round the coffee table" is derived from the furniture piece and its proclivity for encouraging conviviality and light conversation.

Origins of the coffee table

In Europe, ,the first tables specifically designed as and called coffee tables, appear to have been made in Britain during the late Victorian era.

Prior to the late 18th century, the tables used in Europe in conjunction with a settle included occasional tables, end tables, centre tables, and tea tables. By 1780, the high backed settle was being replaced by low back sofas and this led to the development of sofa tables which stood against the back of the sofa and could be used by anyone sitting on the sofa to put down a book or a cup.

According to the listing in Victorian Furniture by R. W. Symonds & B. B. Whineray and also in The Country Life Book of English Furniture by Edward T. Joy, a table designed by E. W. Godwin in 1868 and made in large numbers by William Watt, and Collinson and Lock, is a coffee table. If this is correct it may be one of the earliest made in Europe. Other sources, however, list it only as 'table' so this can be stated categorically. Far from being a low table, this table was about twenty-seven inches high.

Later coffee tables were designed as low tables and this idea may have come from the Ottoman Empire, based on the tables in use in tea gardens. However, as the Anglo-Japanese style was popular in Britain throughout the 1870s and 1880s and low tables were common in Japan, this seems to be an equally likely source for the concept of a long low table.

Also, the use of similar tables has been recorded in the ancient Greek era, following the Roman conquest of North-East Africa.