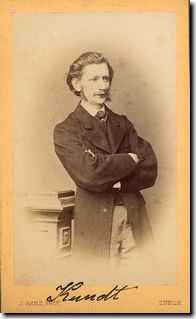 Kundt was born at in . He began his scientific studies at , but afterwards went to . At first he devoted himself to , but coming under the influence of H. G. Magnus, he turned his attention to , and graduated in 1864 with a thesis on the depolarization of light.

In 1867 he became in Berlin University, and in the following year was chosen professor of physics at the in , where he was the teacher of ; then, after a year or two at , he was called in 1872 to Strasburg, where he took a great part in the organization of the new university, and was largely concerned in the erection of the Physical Institute. Finally in 1888 he went to Berlin as successor to in the chair of experimental physics and directorship of the Berlin Physical Institute. He died after a protracted illness at , near , on 21 May 1894.

As an original worker, Kundt was especially successful in the domains of sound and light. In 1866, he developed a valuable method for the investigation of aerial waves within pipes, based on the fact that a finely divided powder, for example, when dusted over the interior of a tube in which is established a vibrating column of air, tends to collect in heaps at the nodes, the distance between which can thus be ascertained. An extension of the method renders possible the determination of the velocity of sound in different gases. This experimental apparatus is called a Kundt's Tube. In light, Kundt's name is widely known for his inquiries in anomalous dispersion, not only in liquids and vapors, but even in s, which he obtained in very thin films by means of a laborious process of upon platinized glass. He also carried out many experiments in magneto-optics, and succeeded in showing what had failed to detect, the rotation under the influence of of the plane of in certain gases and vapors.