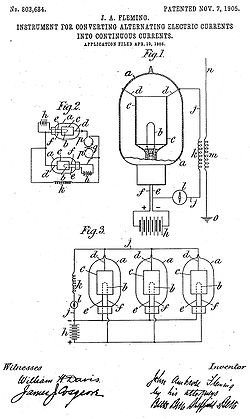 Fleming valve schematic from US Patent 803,684.

The Fleming valve, also called the Fleming oscillation valve, was a vacuum tube diode invented by John Ambrose Fleming and used in the earliest days of radio communication. As the first vacuum tube, the IEEE has described it as "one of the most important developments in the history of electronics",[1] and it is on the List of IEEE Milestones for electrical engineering.

The Fleming valve was the first practical application of the "Edison effect" (thermionic emission) discovered in 1883 by Thomas Edison shortly after his invention of the incandescent light bulb, that is, the emission of electrons by a lamp's heated filament to a nearby metal plate. Edison was granted a patent for this device as part of an electrical indicator in 1884, but did not hit upon any practical use. Professor Fleming of University College London consulted for the Edison Electric Light Company from 1881-1891, and subsequently for the Marconi Wireless Telegraph Company.

In 1901 Fleming designed a transmitter for Guglielmo Marconi to attempt transmission of radio waves across the Atlantic from Poldhu, England, to Nova Scotia, Canada. The distance between the two points was about 3,500 kilometres (2,200 mi). Although widely heralded as a great scientific advance, there was also some skepticism about this claim, in part because the signals had only been heard faintly and sporadically. In addition, there was no independent confirmation of the reported reception, and the transmission, which merely consisted of the three dots of the Morse code letter S sent repeatedly, came from a transmitter whose signals were difficult to differentiate from the noise made by atmospheric static discharges. (A detailed technical review of the early transatlantic work appears in John S. Belrose's work of 1995.)[2] The receptions of signals were difficult to detect with a galvanometer. Fleming researched on a way that he could get the received signal to flow in only one direction, its oscillations could be detected with less trouble.[3][4][5]

In 1904 Fleming tried an Edison effect bulb for this purpose, and found that it worked well to rectify high frequency oscillations and thus allow detection of the rectified signals by a galvanometer. On November 16, 1904, he applied for a US patent for what he termed an oscillation valve. This patent was subsequently issued as number 803,684 and found immediate utility in the detection of messages sent by Morse code.

The Fleming valve proved to be the start of a technological revolution. After reading Fleming's 1905 paper on his oscillation valve, American engineer Lee DeForest in 1906 created a three-element vacuum tube (the Audion) by adding a modulation grid. It could act as an amplifier and oscillator as well as detector. De Forest quickly refined his device into the triode, which was then central to the creation of long-distance telephone and radio communications, radars, and early digital computers. Similarities and differences between the Fleming valve and DeForest's triode caused decades of expensive and disruptive litigation, which were not settled until 1943 when the United States Supreme Court ruled Fleming's patent invalid.[6]