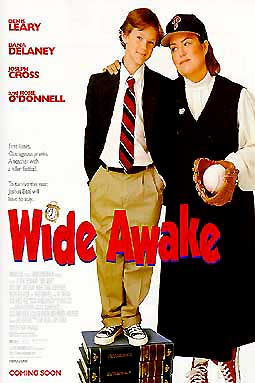 "Wide Awake" is a 1998 written and directed by and produced by Cary Woods and Cathy Konrad. The film stars , , , , and . "Wide Awake" also features in one of her earliest roles as Josh's teenage sister, Neena.

Although it was made in 1995, the film was not released until 1998. It was nominated for "Best Family Feature - Drama" and "Best Performance in a Feature Film - Leading Young Actor" at the 1999 s. It is the only Shyamalan-directed film to date in which the director does not make a . Shyamalan has described "Wide Awake" as a comedy that he hoped would also make people cry.

The film revolves around the themes of family, growing up, and finding truth. The story is told through the eyes of ten year old Joshua Beal () who is searching for answers after the of his beloved grandfather (). Josh is a fifth grader at Waldron Mercy Academy, a private boys school (where Shyamalan attended and where much of the movie is filmed). The adults in his world have not been able to convince him that his grandfather is in good hands, so he sets out on a personal mission to find . In their varying ways he is guided on his journey by his best friend Dave (Timothy Reifsnyder) and a baseball-loving nun (), who teaches at his school. The film depicts Josh's doubts about his religion as he questions if God truly exists, particularly when Dave is diagnosed with and the poignant, sweet moments as Josh experiences his first crush.