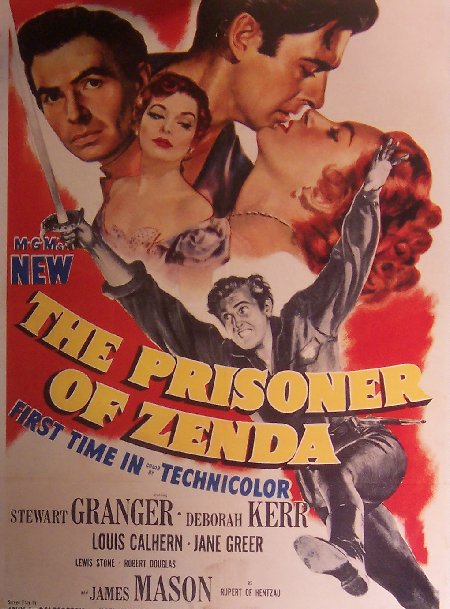 "The Prisoner of Zenda" is a 1952 film version of the classic novel of the same name by and a remake of the famous 1937 film version. This version was made by Loew's and , directed by and produced by . The screenplay by , was virtually identical to the one used in the 1937 version, which was by , adapted by , from the Hope novel and the stage play by , with additional dialogue by . The music score was by and the cinematography by . The art direction was by and and the costume design by .

The film stars , and with , Robert Douglas, and .

This version of "The Prisoner of Zenda" used the same shooting script as the 1937 film directed by and starring and . Slight variations in the screenplay were added by Noel Langley. In addition to the dialogue, the same film score, composed by Alfred Newman for the 1937 version, was also used for this version. A comparison of the two films reveals that settings and camera angles, in most cases, are the same.

According to a "Hollywood Reporter" news item, MGM was to pay Selznick $225,000 for the remake rights to the novel and the play by Edward E. Rose.

In 1999, blacklisted writer Donald Ogden Stewart, who was credited with additional dialogue on the 1937 production, was given a restored credit for the 1952 film.

* as Rudolf Rassendyl/King Rudolf V
* as Princess Flavia. , who was married to Granger at the time, and were considered for the role.
* as Rupert of Hentzau. was to have portrayed Rupert, but had a scheduling conflict.
* as Colonel Zapt
* as Fritz von Tarlenheim
* as Black Michael
* as Antoinette de Mauban
* as the Cardinal. Stone played the dual lead role in the 1922 silent version.