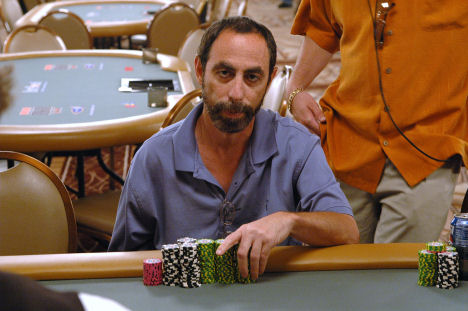 Barry Greenstein (born , in ) is a professional player. He was exposed to poker at a young age by his . After graduating from Bogan High School, [ [http://www.boganhs.org/barry_greenstein.jsp Bogan High School Alumni profile] ] he earned a bachelor degree in from the . He also studied for a PhD in , but left before completing his dissertation. He worked for until retiring in 1991 at age 36 when he began to play poker full time. [ [http://www.poker-babes.com/bio/barry-greenstein/ Poker Babes profile] ] Greenstein has two children and four stepchildren, and resides in . His stepson, , is also a professional poker player.

In 2005, Greenstein wrote a book titled "Ace on the River". , a WPT Season 3 champion, claims that book showed him how to succeed on the poker circuit. Greenstein is known for giving away a free copy of his book to the player who eliminates him in a tournament, including his autograph and details of the hand. Greenstein taught former girlfriend how to play poker in exchange for her teaching him how to speak Vietnamese. He also plays online at , under the alias "barryg1" and is a member of the cardroom's "Team PokerStars".

He was also bet $10,000 by the 2+2 Poker Forums to say "lol donkaments" on an episode of , which he did after winning a hand against . After the initial $10,000, he also received a further $27,000 in donations from other charitable poker players who were amused by the bet. [ [http://www.pokerlistings.com/lol-donkaments-still-paying-out-for-the-kids 'Lol donkaments' still paying out for the kids] ]

Greenstein has appeared in each of the first three series of and all four seasons of the GSN series .

At one time, Greenstein donated all of his tournament winnings to charities, primarily Children, Incorporated, and he is sometimes called the of poker. [ [http://www.cardplayer.com/magazine/article/13846 Card Player Magazine feature article] ]