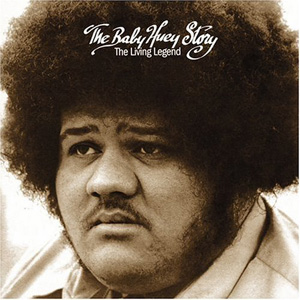 Baby Huey (born James Ramey, - ) was an American rock and soul singer, born in . He was the frontman for the band "Baby Huey & The Babysitters", whose single LP for in 1971 was influential in the development of .

A native of , James Ramey moved to at the age of nineteen, and worked with several local bands as a singer. Due to a glandular disorder, Ramey was a large man, weighing about 350 pounds (160 kg). His size contributed to his stage presence, but also to health problems. Nevertheless, he made light of his condition, adopting the stage name "" after ' giant duckling cartoon character of the same name. In 1963, Ramey, organist/trumpeter Melvin "Deacon" Jones, and guitarist Johnny Ross founded a band called Baby Huey & the Babysitters, which became a popular local act and released several 45 RPM singles, including "Beg Me", "Monkey Man", "Messin' with the Kid" and "Just Being Careful".

During the late-1960s, the band followed the lead of and became a act. Huey began wearing an and donned psychedelic African-inspired robes, and adding sing-song, self-referential rhymes to his live performances. According to his bandmates, Ramey's rhymes were very similar in style to those later popularized by in . The Babysitters were a popular live act, but never took the time out to record an album.

"The Baby Huey Story" and passing

In 1969, the band's agent Marv Heiman secured them an audition with arranger . Hathaway was impressed by the act, and got Curtom Records head to sign Baby Huey, but not the band. Although the band participated in the recording of Ramey's debut album, there were feelings of unease among them, and Ross and Jones quit the band during the recording.

By 1970, Ramey had developed an addiction to heroin, and his weight had increased to over 400 pounds. He began regularly missing gigs or turning up late, and, at the insistence of his bandmates, briefly entered rehabilitation in the spring of 1970. James Ramey died of a heart attack on October 28, 1970, at the age of 26, and was found around noon in his hotel bathroom by his manager. His funeral was held on November 1, in his native Richmond, Indiana.

Baby Huey & the Babysitters' album, "The Baby Huey Story: The Living Legend", was released after the death of their lead singer. Produced by Curtis Mayfield, the album featured several Mayfield compositions, as well as a cover of 's "A Change Is Gonna Come" and two original compositions by Ramey. The album did not sell well upon its original release, and was largely forgotten by the mainstream. Today, the album is considered a classic of its period.

Several songs from "The Baby Huey Story", including "Hard Times", "Listen to Me", and "Mighty Mighty Children", have been frequently sampled by hip hop producers since the 1980s. "Hard Times" alone has been sampled by dozens of artists, including ("The Birth", "Death Certificate"), ("Can I Kick It?", ""), ("Buck 50", ""), and others. Many people, including the Babysitters themselves, see "The Baby Huey Story" as a significant and important influence on hip hop music.

After Ramey's death, The Babysitters briefly employed a young as their lead singer before disbanding. The members went their separate ways to work as instrumentalists in other bands, although they regularly participate in projects involving their past work with Baby Huey & the Babysitters.