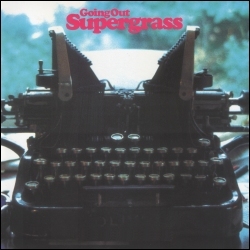 
"Going Out" was the first single to be taken from "", the second album by band . It was released in February 1996, and reached #5 in the UK Charts [ [http://www.strangeones.co.uk/music/45_05.htm The Strange Ones Supergrass Site ] ] [ [http://www.music-city.org/Supergrass/biography/ Supergrass biography : beginnings, career, success] ] . Apparently the song was originally written in the key of E, because the engine of ' tour bus would tick at that same musical pitch [ [http://www.strangeones.co.uk/press/articles/mq960300.htm The Strange Ones Supergrass Site ] ] .

"Going Out" caused problems when accused of basing the lyrics of the song on himself and 's (his then ) involvement in the British . [ [http://www.strangeones.co.uk/press/articles/ms991001.htm The Strange Ones Supergrass Site ] ]

The music video was filmed on a in (the same bandstand is pictured in the video for ""), and features in coats and scarves (due to the cold) playing the song in question. As the middle eight begins, the camera shows a framed photo of with (the infamous train robber), which then pans out to with a at his side. Rob is also reading a entitled the "Evening Rooster", with the headline "SUPERGRASS EAT ROAST DINNERS" and a picture of the band underneath that; he looks over the edge of his newspaper sinisterly as the camera focuses on him.

The band are then seen watching themselves on the bandstand from varying levels of a tree, cradling puppies in patterned blankets. They are then shown playing with a larger mongrel dog on the grass, and as the middle eight finally ends, the camera goes back to performing on the bandstand, only now it is nighttime. The camera then moves to the roof of the bandstand and into the plain black of the night sky, and the end of the video is marked with the caption: "GOING OUT/SUPERGRASS".