Ólafur Stefánsson
This is an Icelandic name. The last name is a patronymic or matronymic, not a family name; this person is properly referred to by the given name Ólafur. 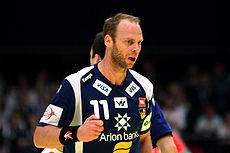 Ólafur Indriði Stefánsson (born July 3, 1973 in Reykjavík, Iceland) is an Icelandic handball player who currently plays for Rhein-Neckar Löwen of the German handball championship. He is the current captain for the Iceland national handball team. His demarcation is right back. He is considered to be one of the best handball players in the world.

As a player for his national team, he currently holds the record for the number of goals scored with a national handball team (over 1400 goals) ever. He is also one of the most enduring handball players of all times, being a field player since 1990.

Stefánsson started in the Reykjavík sports club Valur and became champion of Iceland with that team 5 times. After Valur, he migrated to Germany, playing with LTV Wuppertal, then SC Magdeburg. In 2003, he played for the renowned handball team BM Ciudad Real in Spain, until 2009 where he went back to Germany to play with Rhein-Neckar Löwen.

Career on the national team

In 1995, he was selected to play on the Iceland national handball team to take part in the world championships, which were held in Iceland.

He was captain for the national handball team on the 2008 Summer Olympics in Beijing (ending with the silver medal), and again on the 2010 European Championship where Iceland finished third.